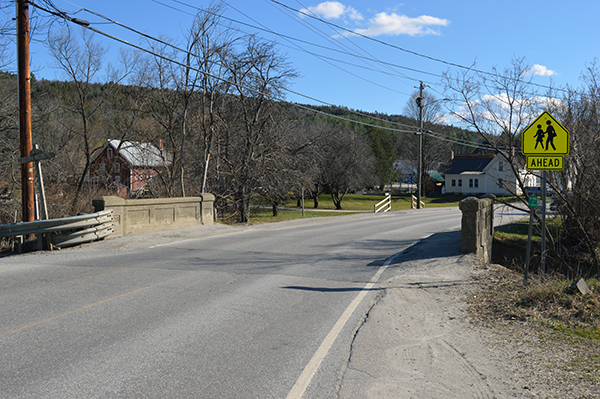 Last year, Moretown received a $375,000 grant from the Vermont Agency of Transportation (VTrans) in order to construct a sidewalk around a small bridge by the post office. The projected completion date was set for 2016, but the firm who has designed the project is requesting additional payment from the town, creating a delay.

Local project manager Pat Travers told the Moretown Select Board on April 18 that he has seen “quite a few challenging months” in the project’s recent past. Engineering firm Lamoureux and Dickinson of Essex Junction first designed the sidewalk to be placed over (on) the bridge but then altered this plan to move the sidewalk around the bridge.

VTrans has denied this design and said that the sidewalk must be placed over (on) the bridge after all. Currently, the bridge has a sidewalk, but it is not handicapped compliant at 5 feet wide and would need to be widened as well.

A community member present at the select board meeting said currently the sidewalk on the bridge is dangerous, as it is raised and leaning toward traffic when one is headed south. She said that it is difficult to maneuver wheelchairs and strollers over the bridge.

Travers said that the town is eligible to receive a second VTrans grant for $97,825, which the town would need to match by $19,565. Doug Henson of Lamoureux and Dickinson has also requested that the town pay them an additional cost of $13,802 to redesign the plan, bringing the additional cost to about $32,000 – not including fees for the clerk of the works.

Select board chair Tom Martin said that he didn’t understand why the design firm should receive an extra $13,802 for moving the sidewalk a few feet in the design and board members agreed, adding that the firm had originally designed the sidewalk to go over the bridge and should still have this plan.

Board member Michelle Beard said, “His [Henson’s] project cost looks like he’s starting from scratch.” Board member Ray Washburn added, “I’m not buying this at all.”

Travers said that if the town did not want to invest more in the project now, it could put out a request for proposals (RFP) at a later date but that this would be more expensive.

They could also continue with the sidewalk project on both sides of the bridge and wait for VTrans to reconstruct the portion on the bridge at a later date. Travers gave a timeframe of 10 years, but select board administrative assistant Cheryl Brown said that it would most likely be sooner.

Travers said that the project is delayed and will not be finished in 2016. Although “this is not a complicated project,” he said, “a simple sidewalk can take three years.” He said that early on in his career, “I never would’ve believed it,” but protocol set by VTrans and the federal highways administration can slow projects down.

“It amazes me that we have this bureaucratic mess to hold it up,” said Martin, adding that it also increases the cost of the project and takes months to get questions answered. “Three years later, we’re not any closer to a sidewalk.”

“It seems like there ought to be a better way,” he said.