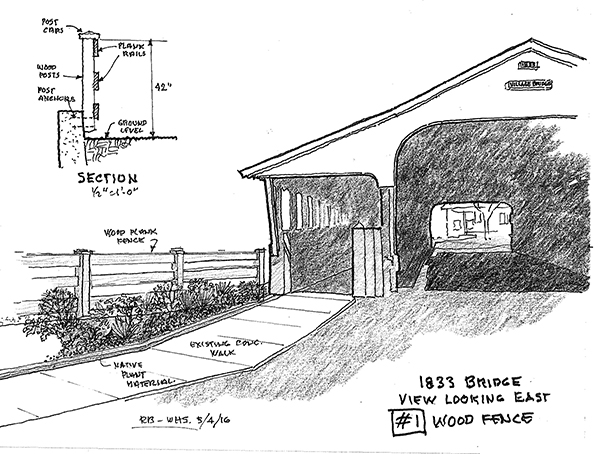 The Waitsfield Select Board favors rough-sawn wooden railings for the town’s main covered bridge but deferred to the Waitsfield Development Review Board (DRB) to make the final decision on how to finish the covered bridge project that took place last summer and fall.

The board, at its May 9 meeting, discussed a sketch by Bob Burley on behalf of the Waitsfield Historical Society depicting rough-sawn wooden railings on both sides of the approaches to the Waitsfield covered bridge. The bridge underwent rehab last year and ended up with larger abutments than previously. Organizers of the Bridge Street Beautification Project advocated for, and the select board approved, installing railings and decorative engraved bricks along with streetlights and benches on the newly formed space of the abutments.

When the town went before the DRB as an applicant to finish the project last month, Burley voiced concerns about the proposed metal railings. He drew up a sketch of wooden railings with plantings in front, between the railings and sidewalk.

On May 9, Burley told the board he made his sketch from a photo that Lois DeHeer of the Waitsfield Historical Society had found. That photo showed the bridge when the street was still dirt and there was no pedestrian walkway on the north side. It showed wooden railings running from the bridge to the end of the abutments.

Burley told the board that the cost of what he was proposing was $900 to $1,200, using rough- sawn local hemlock from the Baird Lumber Mill in Waitsfield.

“It would require a couple hundred board feet to do the fences. I made an allowance for fastenings and miscellaneous materials. Everybody always breaks a drill bit, so I put $100 in the budget for those types of things,” he said.

Town administrator Valerie Capel said she had received comments questioning the maintenance costs of wood versus metal. Road foreman Charlie Goodman suggested using pressure-treated lumber which would last much longer than the rough-sawn hemlock. The hemlock would last six to seven years and the pressure treated lumber would last about 30 years.

“Didn’t we sell bricks for the abutment areas?” board member Darryl Forrest asked. Capels confirmed that the bricks had been sold to donors whose contributions are paying for the beautification work.

“Do we have to have those bricks?” asked Shirley Viens, a town resident and member of the historical society.

The board members weren’t enthusiastic about the plantings that Burley depicted in his sketch, concerned that kids jumping into the river would trample them. They liked the compromise suggested by Burley and Bridge Street Beautification organizers Barbra Gulisano and AnneMarie DeFreest, which features the rough-sawn wooden fence with the engraved bricks accenting the abutment areas, but board members agreed to let the DRB make the final decision.

The DRB reviewed the new sketch and compromise at its May 10 meeting and closed its hearing to deliberate. The board has 30 days to issue a decision.