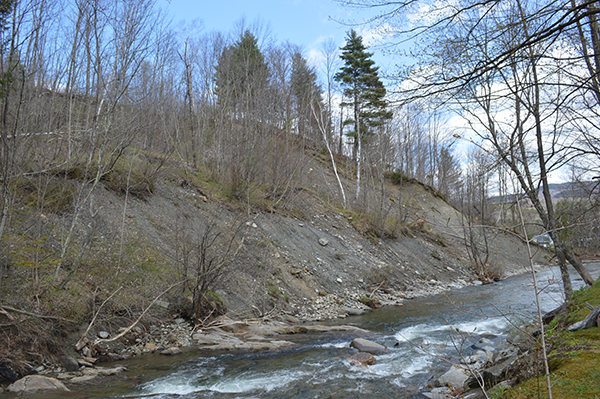 The town of Fayston is investigating fixes to one significant road slump with the hope of using the fix for that to fix a more serious slump.

The first slump is at the bottom of Number Nine Hill, a road that runs from Route 17 and up to Bragg Hill. The slump is located at the bottom where the road is listing toward Route 17.

The more serious slump is to the south of Bragg Hill Road where large trees and clumps of land have been falling down toward the Mill Brook. The bulk of that slope is located below a tennis court that is visible on the left side of Bragg Hill as people drive up the road.

The extent of the larger slump can be seen from Route 17 near the Mill Brook bridge, by looking north up the bank. The slump has crept as far back as the edge of the tennis court, visible about a half mile up Bragg Hill on the left.

“In all likelihood, due to the potential cost of the Number Nine Hill project, we wouldn’t do the work until 2017,” Cadwell said.

Engineer Evan Dietrich at Dubois and King explained that the Number Nine Hill slump is close to the bottom, about one-quarter of a mile from its intersection with Route 17.

“The town has tried putting concrete waste blocks in the slope to keep it from falling further down the road. But that hasn’t worked. So they’ve asked us to come up with a more permanent solution,” Dietrich said.

Dietrich said that there are some solutions that involve drilling into the roadway and embankments and filling the tubes with liquid cement. Something similar was tried several years ago on sections of Sugarbush Access Road and does not appear to have been a permanent fix, Dietrich said.

“We’re going to take some technical borings to find out what’s underneath the road. I’ve heard anecdotally that the road is built on clay that sits on a ledge. We want to find out if that’s the case. It’s possible that we could put in a mechanically stabilized wall to hold back the slope and keep it stable. Or you might use a piling wall with vertical piles that would hold the slope. A piling wall would have to be anchored into the ledge,” Dietrich explained.

As for the steeper slump, he said, “There are solutions that are suitable for even steeper situations, such as the one off Bragg Hill.”