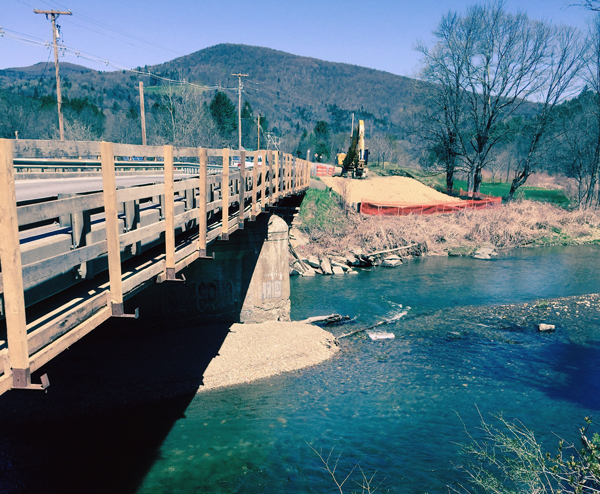 Contractors with St. Onge Construction will begin the work to replace the Route 100 bridge over the Mad River by Lareau Farm next week on May 16. The bridge will be open for one-way traffic from May 16 through June 14 and the bridge will be closed completely for 35 days, starting June 15.

The existing bridge was built in 1938 and is in poor condition. The new bridge will meet current design standards and improve safety. When the bridge is replaced it will go from a two-span structure to a single-span structure. It will be 172 feet long instead of 130 to 140.

Carl Gleason, project manager for St. Onge, explained how the work would be sequenced in an interview this week. First the bridge and run-ups to it will become one lane while contractors dig out the pavement leading to the bridge. They will start digging out one lane and then the second to provide one-way traffic.

There is an existing pier in the river that supports the current bridge. To access that, the contractors will build a temporary, very low causeway. Once they have done that, Gleason said, they will begin to remove the steel and other portions of the old bridge. That work will start when the bridge is closed.

“We can’t get in the river to start that work until June 1 because of environmental reasons and we don’t close the bridge until June 15, so it’s tight in terms of timing,” Gleason said.

Asked if the removal of the old bridge and installation of the new could be accomplished in the 35-day closure window, Gleason said he thought it very likely, noting that there are contractual penalties for being late. He said that crews could be working from 6 a.m. to 9 p.m. if that is necessary.

This project is a VTrans Accelerated Bridge project meaning it occurs much faster than a typical bridge replacement, such as the Kingsbury bridge replacement further south on Route 100. The Kingsbury bridge project first saw a temporary bridge installed and then the old bridge was constructed on-site. When that was completed, the temporary bridge was removed. The process took almost two years to complete. With an accelerated project, a complete road closure is used along with some precast parts to speed up the process.

With the Lareau bridge, Gleason said, the abutments are being precast and a crane will be used to place them. The other pieces of the bridge, the steel girders and the 4-inch precast panels that will make up the deck will be transported to the site and installed.

Gleason said that, thanks to good engineering, St. Onge was able to propose to the state a less expensive way to replace the bridge which shaved $720,000 off the cost of the project. That cost savings – if completely realized – is split between the contractor (who engineered it) and the state.

The Vermont Agency of Transportation (VTrans) will hold a public preconstruction meeting for the project on Monday, May 16, 2016, at 6:30 p.m. at Waitsfield Elementary School.

The purpose of the meeting is to provide an overview of this project to town officials, local residents and businesses, emergency services and other interested parties. Presenters will review existing site conditions, work that will be done, detour route and schedule. Representatives from VTrans, the town and the contractor will be available to answer questions.
As part of the project, the driveway to American Flatbread will be moved further north away from the bridge and the gravel that Waitsfield has stockpiled at the Tardy site, across from the former Elusive Moose, will be transported to the Waitsfield town gravel pit. Material from the excavation of the current abutments will be used to relocate the American Flatbread driveway.