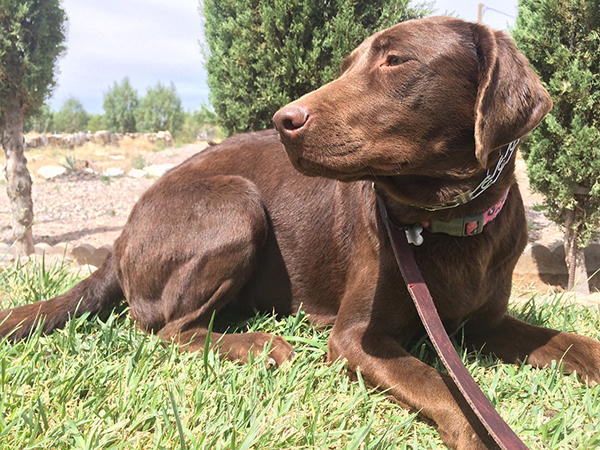 Aiden Heath, the 8-year-old Waitsfield boy who many readers know for his efforts to save money for a diabetic alert dog, recently completed collecting saliva samples for his dog, Angel, to begin her training.

Heath won the hearts of people near and far with his efforts to save every penny he could for an alert dog from the time he was 4 years old and diagnosed with type 1 diabetes. Between his savings and a variety of local and even some national fundraising efforts, he raised enough money for his dog.

The next step is getting saliva samples representing the spectrum of his blood sugar levels. They had to be collected on cotton balls.

“We had to send in seven jars, each with a corresponding blood sugar range, and each with 15 saliva-soaked cotton balls in it. They had to be sent overnight to Nevada, on ice. We had three weeks to collect them, but Aiden wanted to get them done and off to Nevada so he plugged along as fast as we could get them done. Angel was ready for them as soon as we could get them there,” explained his mother, Jenni Heath.

“For Aiden, blood sugars can go very low to very high and anywhere in between multiple times a day so hitting the right blood sugar ranges for all the samples was not hard to do. It was his willingness to actually just plug through the samples that made the process simple and efficient. I was so proud of how he powered through it. He did say at the end though, ‘I am so glad they are all done because chewing on cotton just does not taste good!’ The most anxiety-filled part of all of it was praying after all that hard work on Aiden's part that the samples would make it OK in the mail overnight to Nevada and still be preserved by the time they reached their destination. The best part: The samples made it and Angel finally got to ‘smell’ Aiden. So Angel is learning Aiden from afar and we look forward to the day Aiden can get to know Angel in person.”

Aiden has a busy summer ahead and is recovering from having his tonsils and adenoids out as The Valley Reporter goes to press. He is waiting patiently for fall when Angel is slated to arrive and plans to do a lot of fishing, boating and swimming this summer to keep himself occupied.

“Some days he looks at her picture and wishes she could be here now. He tells himself, ‘Good things are worth the wait and she's a very good thing,’” his mother said.

Heath said that she and Aiden and her family try to focus on the silver lining of a type 1 diabetes diagnoses.

“It has taught him though how to be a healthier individual and to actually use food as fuel for his body. It has taught him to also be stronger and more empathetic. It's also taught him a lot about his body and that it wasn't his fault his immune system attacked his pancreas ... learning about anatomy too,” she added.

For now, they’re focusing on summer and watching for updates from Angel’s trainers in Nevada and counting the days until she arrives this fall.

“Angel is a beautiful girl and we love her already. When she gets here a whole new process begins, training Aiden and me how to handle her and learning how to take her in public and learning how to deal with the public when they don't understand she's not a pet but a medical necessity and protected under ADA law,” she added.