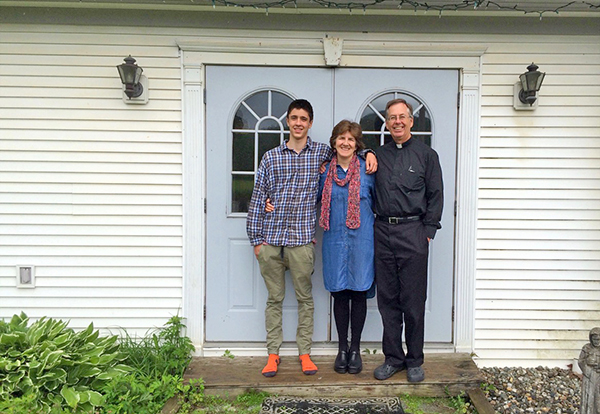 Steve Young, the assistant pastor at the Church of the Crucified One in Moretown, arrived in Warren in the mid-1970s seeking a place to stay.

A self-professed atheist who found solace in nature, he walked into Emma Ford’s house at the entrance to Warren Village because of the Emma Ford Real Estate sign that was out front.

The first words she said to him were, “Are you a Christian?” He fudged his answer a bit and Emma Ford found him an apartment in the village. Right after he’d moved in and was getting his bearings, a woman walking by started talking to him.

“She mentioned going to Warren School and started talking about her relationship with God and then about the church fellowship and that there would be food. She was pretty. I went,” Steve said.

That pretty woman was the best friend of Ruth, the woman who would become his wife and with whom he would work for several decades in youth fellowship, education and ministry at the Church of the Crucified One in Moretown and in Pennsylvania and Africa.

Ruth, Steve and their 16-year-old son, Thomas, are leaving The Valley this week, headed to western PA where their church has other facilities, including camps for youth. Their focus will be on youth ministry with camps, retreats and a working farm. Their time in The Valley has been full and fulfilling and brought them together in marriage and brought Steve to his deeply held faith.

Steve was raised as a Catholic in Cambridge and after college had been in the Peace Corps and had worked for the Natural Audubon Society in Washington, DC, as an environmental lobbyist.

“I was an atheist but a seeker. I was looking for a deeper truth and a realized I wouldn’t find it in DC. I would not believe that the beauty I saw in nature was simply Darwin. I wanted to find a pattern and a way to understand it. I came up here and thought I might have found nirvana,” he said.

For Ruth, a window opened into spirituality and faith for her one night in college when she got down on her knees and prayed. She was raised as an Episcopalian and when she was 12 her parents let her choose whether to go to church.

“It was such a cold church,” she said. “I always had a sense that there was something out there. In college I realized there was something bigger than me. I was heading down the wrong path. I got down on my knees and prayed. The next morning I felt everything had changed for me. I felt like I was sitting in a hand, like the old Lash Furniture sign. From that point, I started looking for a church, someplace to be fed and to know more,” she recalled.

She too ended up in Vermont and met Steve in 1981. They were friends for many years during which time Ruth was doing missionary work in Maryland, Virginia and Tennessee and also working at Moretown Elementary School as an aide to a deaf student. They married in 1990 and in 2001 they adopted their son, Thomas, from Russia.

While doing missionary work in Kenya, Ruth realized that “there was a whole other world of children who need our help.” That led her to create Everyone’s Child, the child-focused mission she still runs.

The Church of the Crucified One moved around The Valley in the early days. It was at Warren United Church for some time and on Roxbury Mountain at the home of Father Paul Stewart, their original pastor. In the 1980s the property where the church sits in Moretown became available and the congregants bought it and completely renovated it in seven weeks.

“A lot of us were hippies from the Woodstock generation. We were passionate about our church and our faith,” Steve said.

The Church of the Crucified One sprang from the charismatic renewal of the late 1970s and 1980s. Based in Pittsburgh, PA, the faith might be described as a mix of the Protestant and Catholic faiths. The faithful believe in the movement of the Holy Spirit, that it moves in charismatic ways. Clergy become fathers and sisters and Steve became a priest and Ruth a nun, studying and taking vows of spiritual poverty, chastity and obedience.

“The church is a monastery without walls. People of all faiths and walks of life have come to our church,” Steve said, noting the last names of some of the founders: Warner, Dudash, Maynard, von Trapp, etc.

As the church evolved and the congregation grew, they both became more involved in youth ministry. Ruth’s college degree was in English and psychology. She went on to get a teaching certificate and a master’s in education. She received a doctoral degree from UVM in education leadership and policy studies and ran the church’s preschool for 25 years.

After their 30 to 35 years here, they’re ready for a transition, yet they’re sad to leave.

“We are so thankful to the families who entrusted their kids to our preschool. As a parent, I know how much preschool teachers bless, mentor and invest in your child. We’ve been so blessed,” Ruth said.

“To work with families on faith and with their kids is so intimate. We’ve taken kids all over the world on youth trips to Israel and Egypt. We took preschoolers to Kenya,” Steve said.

They think their work here is done and want to finish well. They are proud of their accomplishments and especially proud of the Mad River Valley Interfaith Council and the faith-based work that it does. “The gospel in action,” they called it.

In Pennsylvania, they are near Conneautville where they bought an old stone house on 13 acres in 2001. Steve wouldn’t let Ruth see it until after he’d begun to fix it up. They’re looking forward to living out in the country and having a dog, a garden and some goats after spending so many years in the apartment at the church.