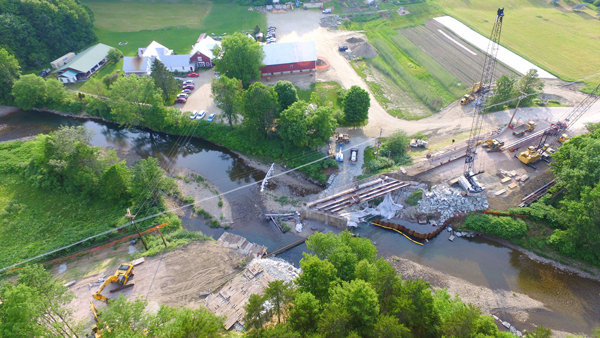 Route 100 is closed at the Lareau bridge while the bridge is replaced. The road closed on June 19 and will remain closed for 35 days.

Workers with St. Onge Construction began removing the beams on the south side of the bridge using large cranes as soon as the road was closed. Earth-moving equipment was used to remove the abutments and approaches prior to the closing.

Aerial photographs by M. Bonotto show the southern half of the bridge gone and the northern half stripped down to the beams. A pylon in the river that supported the bridge will also be removed.

Crews will be working dawn to dusk to complete the replacement in 35 days. While the road is closed, traffic is being detoured west on Route 17 to German Flats and then to Sugarbush Access Road. People are also using other local roads including East Warren Road and Rolston Road to get around the closure. Law enforcement officers are patrolling the official and unofficial detours. The speed limit on German Flats has been temporarily reduced to 30 mph during the closure.