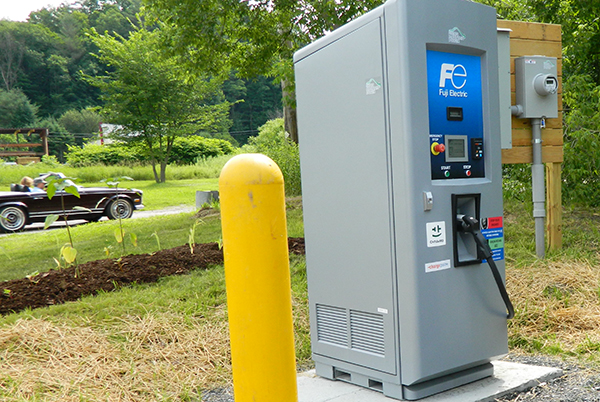 Last fall, Bill Powell of Washington Electric Cooperative (WEC) approached the Harwood Union High School (HUHS) board about installing an electric vehicle (EV) charging station at the school at no cost, while also paying for five years of operation. The board ultimately decided not to proceed with the installation.

Several weeks ago, HUHS students and community members asked the board to reconsider the offer and at the board’s June 15 meeting, they voted to proceed with the installation.

Scheffert Nease said that while “the contract is generous” – an $18,000 value for the installation and five years of service costs – she worried about operating and unknown repair costs after the five years is up.

WEC representatives said that operating costs would be about $2,600 per year but could be as low as $550 per year with a smaller energy allowance.

HUHS students and board members said that Champlain Valley Union High School (CVU) in Hinesburg – one of two Vermont schools to host an EV charging station – reported no issues with managing the station.

“CVU has no difficulty because they don’t manage it,” Scheffert Nease said. Their contract with Green Mountain Power (GMP) states that GMP assumes ownership for the station, including costs of maintenance and repairs, indefinitely. The school then pays GMP a discounted monthly cost of about $70.

Scheffert Nease asked WEC representatives, “Would you be willing to consider that kind of contract?”

President of the WEC board Barry Bernstein said that the company would negotiate with Scheffert Nease to create a similar contract. “She’ll be happy and we’ll make sure of that,” he added.

The charging station has two ports with 18-foot cables. It can service four cars in an eight-hour period.

HUHS will receive 90 percent of electricity costs paid by users. Instead of having to pay that remaining 10 percent, they can set the electricity rates at a 10 percent increase to cover the total cost.

WEC representatives said that the life expectancy of the unit is estimated at 10 years but that it could last longer. The units have been around since 2010.

IN SUPPORT OF THE STATION

A discussion about whether HUHS should adopt the unit lasted several hours. Community members cited the convenience of the station for EV car owners and the integrity of supporting sustainable energy sources.

HUHS senior Maura Riley said that when she first saw an EV charging station, she was able to see what clean energy infrastructure changes would look like for her generation. Similarly, another senior, Harrison Davis, said that his family installed solar panels after he learned about Crossett Brook Middle School (CBMS) panels as a student there.

“It’s easy to underestimate the impact these things can have at school,” Davis said.

Many spoke about the use of the station for curriculum. HUHS eighth-grade science teacher Brian Wagner said that his students could evaluate and model data that arises from the charging station reports, forming an argumentative essay about electric cars or sustainable energy sources.

HUHS senior Anneka Williams proposed that the schools could use profits from the station to partially offset lost income from bottled water sales – about $11,000 yearly.

Scheffert Nease said that she never disagreed with the merits of the station; rather, it was the potential operational and legal issues that caused her to hesitate. The station would eat up board time, with members having to set the electricity rate, as well as regulating the usage. They may also have to track whether or not the school was breaking even.

Spotty cell service was another issue, since the station needs the service to operate. And if the station failed to operate, users may get stranded at the school.

WEC representatives said that a cellular hot spot could be directed at the station, solving that issue. HUHS board member Laura Caffry suggested the installation of a free public Waitsfield Telecom phone outside of the school, in case of emergency.

“People don’t show up at these [charging stations] like it’s an oasis in the desert and they’re about to die,” board member David Goodman said. Owners of electric cars are usually “topping off” their charge, not coasting into the station on empty.

Last year, when the board voted to refrain from having the station installed, they were looking for information from other Vermont schools with stations. While those schools do not report problems, “Yes, there are unknowns. But we don’t need to respond to these unknowns by creating the worst-case scenarios that haven’t happened,” Goodman said.

Eventually, Scheffert Nease said, “You’ve convinced me. ... I believe that we will work it out.”

The board voted to authorize Scheffert Nease to negotiate a contract that puts ownership of the station in the hands of WEC indefinitely.