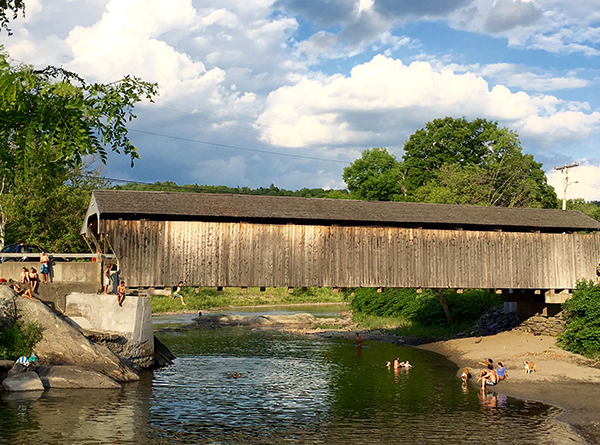 Jumping off the Waitsfield covered bridge has been an attraction for tourists and locals for as long as anyone can remember. However, this year people may have to start looking for calmer waters.

Liam Devereaux, 15, Waitsfield, says that older community members yell at him to stop jumping from the bridge constantly. One community member physically pulled him from the walkway railing, which is one of the areas from which kids jump.

When told about the prospect of having fellow Harwood students patrol the bridge, Aidin Melville, Fayston, responded, “No one would do that,” considering they most likely jump off the bridge themselves.

“We are jumping at our own risk,” Karsten Vlahos, Waitsfield, said.

Devereaux, Melville and Vlahos have been watching their predecessors jump into the swimming hole below the bridge for as long as they can remember. They do not believe that they should be prohibited from something that they do not believe is dangerous.

On June 27, the Waitsfield Select Board discussed ways to restrict children from jumping off of the oldest operating covered bridge in the state. Members of the community joined the discussion stating that children are disrespectful to the neighborhood surrounding the bridge and that they are “tired of it.”

Currently there is no ordinance that restricts jumping from the bridge, but that does not keep members of the select board and residents from policing it.

Sal Spinosa, one member of the select board, said he has to constantly fix his personal snow fence that he installs to stop access to some of the “more dangerous” spots of the bridge, referring to the gap between the pedestrian bridge and the covered bridge. He has also sawed off a rope swing that was once hanging from the bridge’s southeastern wall.

Though at the meeting an ordinance seemed imminent, Spinosa recently said that it is the last order of business.

Waitsfield’s First Constable, Peter Laskowski, believes that there is a definite need to make the bridge safer. Kids should not be on the roof, Laskowski said, especially if they are causing damage to the bridge.

One issue that has been brought up by the select board and Laskowski is the high level of traffic through the bridge and the kids’ exposure to it.

Laskowski noted that there have been injuries at Warren Falls due to kids “miscalculating” jumping from the rocks, which are much higher than the bridge. He has never heard of an injury that has occurred at the bridge.

“If the kids could regulate themselves better that would be the best option,” Laskowski said, while also stating that parents should ensure that their kids are aware of the dangers of playing in the street. He would like to see as little town-regulation as possible.

Laskowski said he is ready to go along with whatever the town decides. If there is an ordinance he will be there to help enforce it He believes that the safety of the kids and damage to the bridge need to be considered while moving forward.

The town has been warned by its attorney and the Vermont League of Cities and Towns that an ordinance could open them up to different forms of liability if they do not have the means to enforce it, said Waitsfield town administrator Valerie Capels.

“The signs that have been installed are advisory and could offer the town some protection in the event something terrible happens,” Capels said.

In regard to signage, Laskowski said he could not enforce a “no jumping” sign. However a “no trespassing” sign is different because it legally bars kids from specific town property.

“My hope is that this measure will alleviate or diminish the problem altogether,” Spinosa said.

The stir about the Great Eddy bridge has already caused some parents to rethink their kids’ actions. Donna von Halle, who vacations here, said she is no longer allowing her kids to jump from the bridge. If there are discussions about banning it then she will have her kids find another way to make use of the swimming hole, she said.

Other tourists said they thought the bridge should be left alone. The reason why they come here is to relax and not have to worry about restrictions on everything such as ordinances.

The signs that have been posted read “Danger. No climbing, jumping, or diving from the bridge! You may strike submerged objects and be seriously injured or killed.” Though they were not up long before being written on by jumpers to read “no danger” and “question authority.”