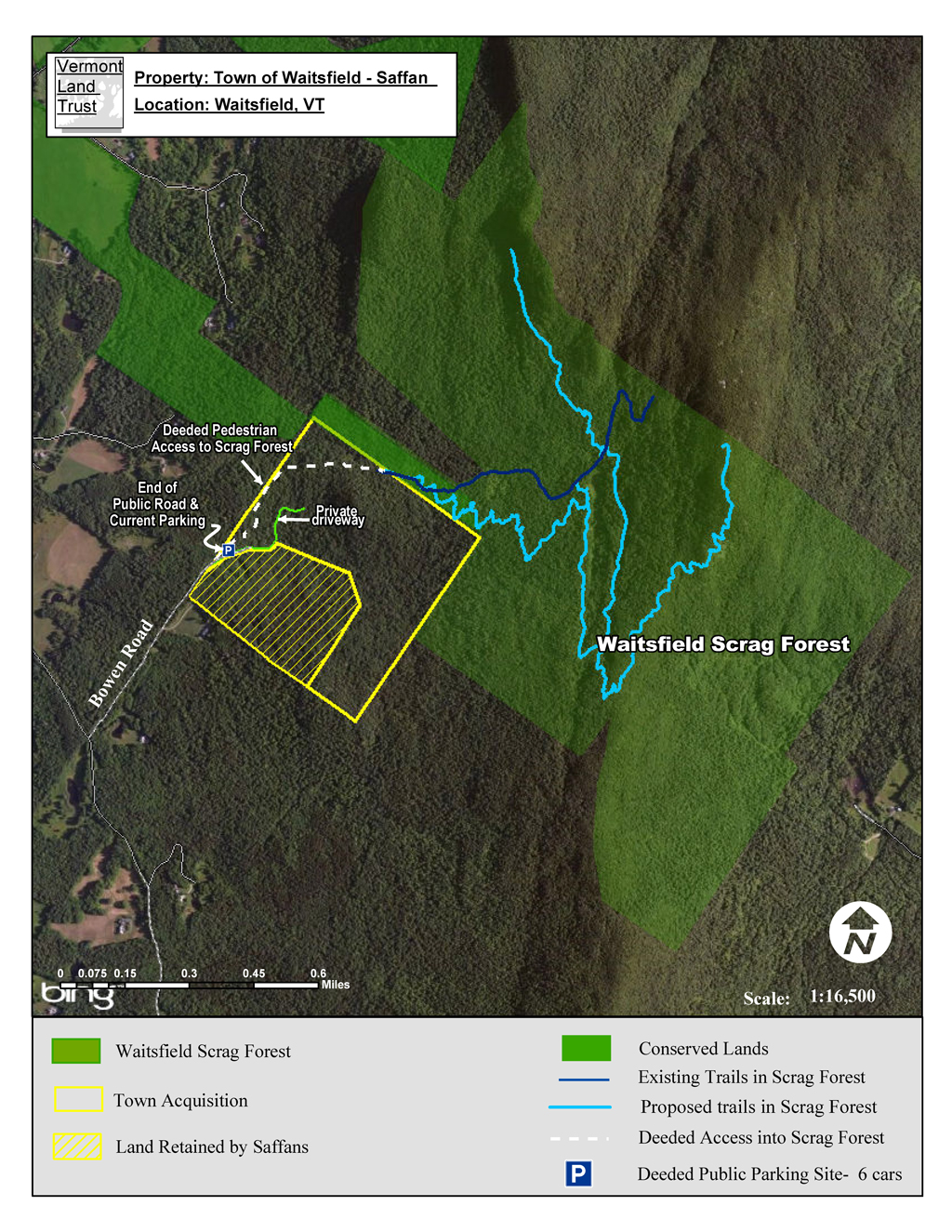 Waitsfield could add 110 acres to Scrag Forest if voters are willing to tap funds from the town’s conservation fund to be added to a federal grant that the town has received.

On July 28, the Waitsfield Conservation Commission and Liza Walker of the Vermont Land Trust presented this idea to the public in a public forum at Waitsfield Elementary School.

In 1991, the Scrag Mountain Corporation donated 360 acres of forest to Waitsfield, earmarked for recreation, habitat protection and sustainable logging practices that would benefit the town. Since then, through anonymous donors, the town forest has grown to 640 acres. Recently the Saffan family approached Waitsfield with the opportunity to buy 110 acres of their property, located adjacent to the existing Scrag Forest.

Acquiring this lot is a “one-time, now-or-never opportunity,” Phil Huffman, chair of the Waitsfield Conservation Committee, said. The town would be able to better protect multiple habitats, clean water and valuable recreation amenities as well as continue its timber harvest.

Currently, the town has a right of way for a 10-foot-wide footpath through the Saffan’s property that leads into a limited trail system in the current Scrag Forest. With the acquisition, the town would be able to build more parking at a new trailhead at the end of Bowen Road.

Access to the recreational trails was the most touted benefit of the possible acquisition. At the beginning of the meeting some community members expressed their desire to hike in Scrag Forest but said they were not able to find their way into it.

Community members were asked to give input at the end of the night. While most of the audience had positive remarks and were excited to hear about the expanded trail system, there were some that questioned the purchase.

Jerry Miller, Waitsfield, said that he doesn’t believe that the town should be spending the money “on land that isn’t going anywhere.” Another community member sitting next to Miller explained that he too thought that the acquisition would be a “complete waste of our resources” when “the town is already in debt.”

Huffman stated that the expanded recreational trail system could provide significant economic benefit to the town. In a 2014 economic study of the Mad River Valley, recreation was identified as one of four economic pillars in The Valley.

Huffman also noted that the Blueberry Lake trail system brings in an estimated $1.9 million in economic value to Warren.

Waitsfield is looking to purchase this piece of land with only 10 percent, or $40,000, coming out of the town’s conservation fund. The rest of the funding would come from the United States Forest Service’s community forest program, the Vermont Housing and Conservation Board, other smaller grants and private donations.

If the town does not buy the land from the Saffans, they will take it to the market and it will be sold to a private owner, which would complicate the town’s ability to act on the current Scrag Forest, said Huffman.

One oversight that Huffman admitted is that the town would take in additional tax revenue if the lot were sold to a private buyer, because it would likely be developed.

Robin Morris, Waitsfield, said that he would rather the 110-acre lot be used for recreation and the protection of water resources and habitat, rather than further development.