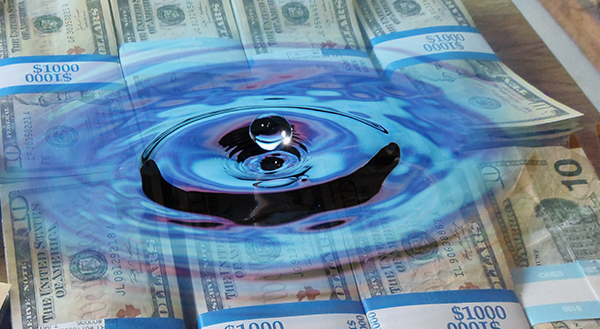 The Waitsfield Water Commission is currently reviewing its billing procedures to ensure that their system is the most efficient and the fairest. Evaluating the water system is incredibly difficult for a variety of reasons.

The Waitsfield municipal water system, which started allowing users to hook up in 2013, has used the same billing system since the start even though there have been complaints regarding fairness of the system.

The billing system is based on equivalent residential units (ERUs). An ERU represents the amount of water that a three-bedroom house would use, based on the maximum amount of wastewater that the house will produce, or 245 gallons a day.

When Waitsfield’s system was started, an ERU was based on 245 gallons per day. Waitsfield now considers average daily use for a three-bedroom home to be 109 gallons and considered 10,000 gallons per quarter to be average use, which is also the standard in Vermont.

As of 2016, the town of Waitsfield reported that it has 132 total accounts for the water system, but only 106 are paying the debt service fee. These figures include accounts that have multiple users on them such as shopping centers and housing developments.

The annual charge per ERU is $800, which includes $600 in debt service and a $200 operations and management fee. Some users, however, are only paying debt service because they are not hooked up to the system, but they did agree to pay in 2013.

These charges come with 10,000 gallons of water per quarter; if users go over that limit then they are charged per gallon.

In the past, customers have brought complaints to the water commission because they do not believe that they should have to pay the full $800 if they do not use the entire 10,000 gallons; however, there is no way to change that fee structure because the debt repayment schedule is based on the structure.

There are other ways that water commissions could pay the debt service and the water commission is taking them into consideration while reviewing their own system. Water systems can be based on usage with a base fee, but that would require drastic changes to the water ordinance.

In 2011, when the water ordinance was created, the water commission believed that a system based on ERUs would be the best way to pay off the town’s loan. The ordinance is being re-evaluated this year and the town is working with consultants on the billing system.