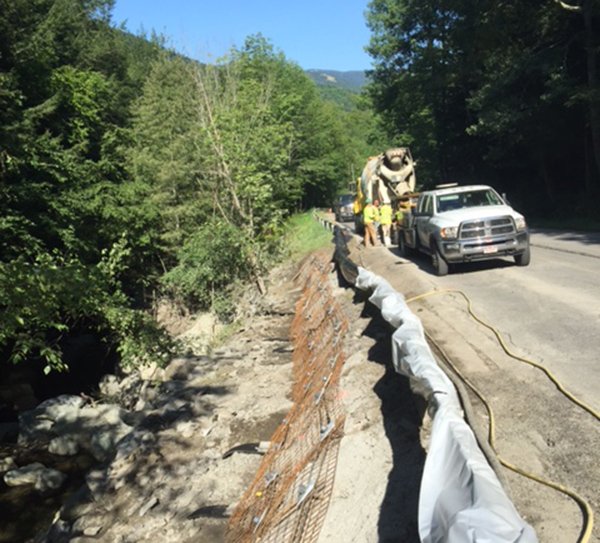 Brook Road in Warren will be closed Thursday, September 1, between Dump and Behn Roads between 10 a.m. and 2 p.m.

During that time the town’s contractor will be finishing work on the road.

Work has been ongoing over the past week at Brook Road in partnership with Geostabilization International (GSI). Warren has completed six projects with the company on other roads around Warren.

Geostabilization International, Colorado, is the only company that can stabilize a road by both drilling soil nails and shooting soil nails with compressed air into the earth. At Brook Road, the company decided that drilling the soil nails would be a safer method.

The soil nails are 30 feet long that run underneath Brook Road and they secure the loose earth that is sliding downhill, causing the road to slump. After the nails are secured, they are grouted in place.

On the outside, GSI covers the nails with shotcrete, which acts as a retainer wall for the road.

In 2011, after Tropical Storm Irene, the hill beneath Brook Road experienced washouts and they used a traditional system of stabilization by replacing the rock that had been washed away.

That system did not work and the engineer that they had previously worked with recommended Geostabilization International.

Warren worked proactively to stabilize Brook Road. If they had waited too long the road could slide down as far as 20 feet. Fixing the problem early not only makes the job easier, it also costs the town much less, according to Perry Kairis, technical engineer, who is a project development engineer with GSI.

GSI’s design plans have a 75-year design life and a five-year warranty because they are that confident in their work, Kairis said.

On September 1, the town’s contractor will visit the site to restore a shoulder to the road, restore drains that were previously there as well as seed and mulch the area.