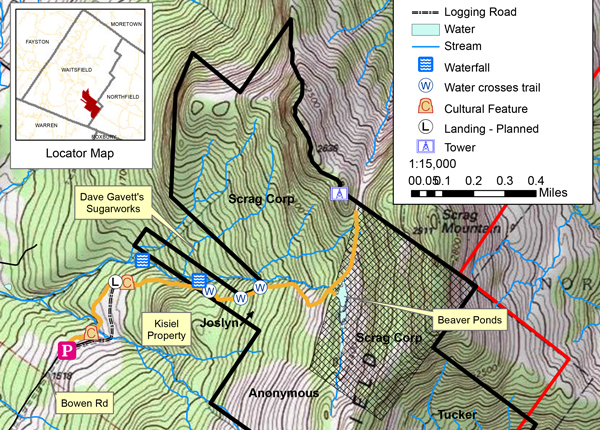 The Waitsfield Conservation Commission and the Waitsfield Select Board are considering a request by Dave Gavett to sugar in the town’s Scrag Municipal Forest.

Gavett would like to lease taps in the area of the Scrag Forest that was logged last winter. He currently has a 5,000-tap sugaring operation on land that adjoins the Scrag Forest. He would like to expand his sugaring operation by another 4,500 to 5,000 taps. He proposed paying $1.40 per tap for the first five years of a 15-year contract. The tap price would be adjusted in five-year intervals using the same formula that the state uses. The contract he proposed is similar to that which the state uses when it leases state lands to sugarmakers.

Gavett discussed his request with the Waitsfield Select Board on August 8 and the board discussed it again this week at their August 22 meeting. Board member Darryl Forrest explained steps he had taken to get more information about other towns that lease land to sugarmakers and noted that it would be good to inform the public that the town has received this request.

“We need to notify the public and invite anyone else to respond with any similar requests, by noon on August 31, to the conservation commission,” Forrest said.

When Gavett presented his plan to the select board, and earlier when he presented it to the conservation commission, he said that he would avoid setting lines near any trails and that lines would be high enough for those walking off-trail to pass under (except for in deep-snow years).

He told the boards that his intention is to improve the logging roads in order to provide easier access and that these improvements may help with future logging operations or possibly any trail creation in the area, although that section of the forest is not currently accessed by many people.

The select board has asked its attorney to review the proposal and the contract and is also reaching out to the Vermont Land Trust for comment as the land trust is a deed holder in the forest.

Gavett hopes to begin setting the taps in September. Both the conservation commission and the select board expect to have an answer for him by September 12.