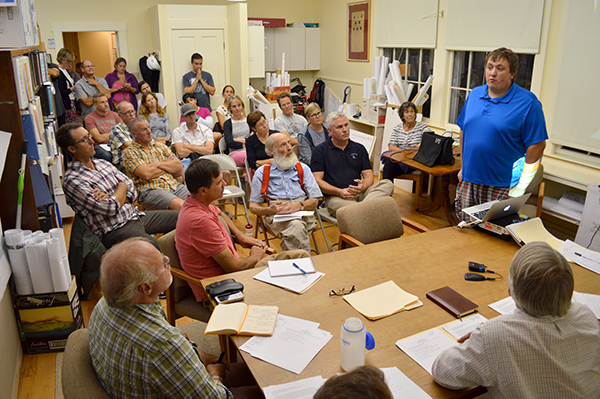 The Mad River Valley Recreation District is continuing the conversation to get The Valley to buy the Mad River Park recreation fields.

On Tuesday, September 13, Logan Cooke of the recreation district gave the Warren Select Board the same presentation that the Waitsfield Select Board saw on August 22. There were a few more details provided and many more people in the audience.

Representatives from Mad River Lacrosse and Soccer came to speak to the select board as well, on behalf of the recreation district, expressing their concern and many parents’ concerns that the fields will be taken away from their children.

Drew Simmons and Dan Sullivan were the representatives from lacrosse and soccer, respectively, and they spoke about the immense need to have a central location for their sports teams to practice.

Simmons addressed the crowd noting, “We have approximately 100 kids per year that play in this program from third grade through eighth grade.” He told the crowd and select board that Harwood does not provide a lacrosse program for middle school students and that they are the provider of these programs.

Simmons went on to say that families looking to move to The Valley take into account adequate recreation sites for their children, and if the town does not have it they will not move here.

He also said, “You know there has been a lot of talk about where our kids should not be in the Mad River Valley; this is one of the places that they should be. ... I think it would be a significant loss to our community if it went away.”

Audience members noted that the Mad River Park is a great location for children from all five towns that feed into the sports programs, and if they were to move these programs further down Route 100 they risk losing athletes from Duxbury and Waterbury.

Cooke also noted the economic benefits of owning the field because it brings so many people to The Valley. If the town owned the land they could use it for larger festivals bringing many tourists to The Valley.

Cooke noted that Stowe holds a lacrosse tournament each summer that brings thousands of players plus all of their families, bringing in an immense amount of tourism dollars to its businesses.

The select board asked about costs of the fields past the purchase of the land; long-term maintenance costs, additional storage facilities and a hike in insurance costs that would be incurred onto the recreation district were pointed out as need-to-know information prior to moving forward.

These costs, the select board said, could result in an increase in fees to the town after they acquire the land.

Cooke responded that all of those are being considered and many of them are already flushed out, but the first step to take care of is the appraisal of the property and the ensuing negotiations with the Kingsburys.

The recreation district expects the appraisal to be finished by the end of the month.

The last question that the select board had for Cooke was who would pay the property taxes to Waitsfield for the land? Cooke told them that because the municipal district would own the land, it would be exempt from property and education taxes.

Cooke explained to the select board that the Kingsburys would be willing to extend the lease that they currently have if a deal is moving forward with the towns.