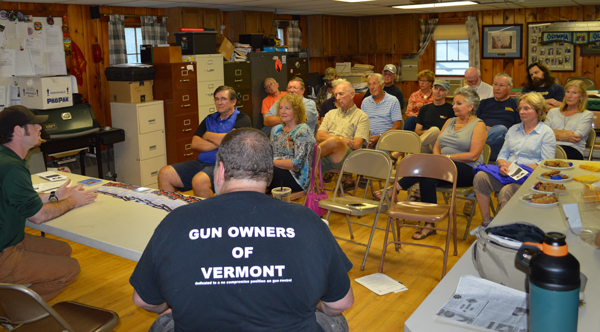 Bill Robinson, the Warren chapter’s president, led the group in the Pledge of Allegiance prior to introducing the two candidates and he warned his fellow members to be respectful of beliefs different from their own. The meeting was held in Warren on September 9.

Sallerson, of Warren, and Leotta, Waitsfield, are campaigning for two spots in Vermont’s House of Representatives. They will be trying to upset the current representatives, Maxine Grad, D-Moretown, and Adam Greshin, I-Warren, both of whom are running for re-election.

Sallerson spoke to the group of gun owners first to describe his new idea for state representation. He wants to bring the power of government back to the people. Sallerson explained that the Legislature is only in session for five months, and he is devoted to interacting with every voter in The Valley for the remaining seven months to find out what they would like to see addressed.

“That seven months is an amazing amount of time where I, as a representative, can reach out to all of you,” Sallerson said.

Sallerson estimated that it will take two months to contact everyone in The Valley via phone.

After speaking with all of his constituents, Sallerson would identify the most important points to address in the Legislature. He told the Gun Owners of Vermont members that he is not running for office to represent his own position, which is what he says candidates nowadays do; he is running to represent the people’s positions.

Sallerson is electing to take his personal positions out of the equation, stating that he is not solely liberal or conservative.

“Parties don’t represent people, they represent platforms, and that is why I am running as an independent, because I don’t believe a party can represent a person,” he said.

Many in the crowd took issue with the fact that Sallerson was committed to representing the majority. Members spoke to him about a liberal vocal minority that they said has been taking over The Valley recently.

“I have lived here 46 years full time and was part time before that and the people that have moved in don’t have the interests that we do. It’s going out to eat, spending all the money and showing off whatever I have. It’s not the people we moved here ... to hunt, fish and ski [with.] Those people haven’t an inkling and they don’t have a care, and they don’t know what this state was about when you were born, and you’re going to listen to all these people that think they’re so smart,” one member told Sallerson.

Sallerson believes that it is up to the people to participate in their democracy in order to share their opinions.

The second question that Sallerson faced was whether he was pro-life or pro-choice.

“As a representative, my job is never to vote what I believe, it is to represent the majority of the people I represent,” he responded, but said he is always willing to share his opinions. On this particular issue he said he is not a woman and so he doesn’t believe that anyone has the right to tell another what to do with his or her body.

He said, though, that if his constituents were pro-life, he’d represent their opinions over his own.

One audience member gave the advice that he follow the Constitution in regard to what he represents and that prior to taking the majority opinion he should ask himself whether or not it lines up with the Constitution.

Eventually, the gun owners of The Valley asked Sallerson questions regarding firearms. They were most interested in whether he supports universal background checks, which he does.

Sallerson mentioned that anyone who can buy a gun could come into that very meeting and open fire, to which the entire room erupted in laughter.

The group noted that there is already enough regulation in Vermont and any further regulation would not quell crime but would make it harder for law-abiding gun owners to buy them.

“They had a registration and they set it up saying this is going to be a great thing, we’re not going to take your guns, and then the wrong person got in and they started taking the guns. And then they started annihilating them,” the audience member said.

The reason he does this, he said, is because he doesn’t know who else has a gun who shouldn’t, saying that the state currently doesn’t look far enough into the owner’s history.

After a half hour of impromptu debate, one audience member asked that Sallerson be cut off from speaking, and 10 minutes later they moved on and allowed Leotta to address the crowd.

“You all know who I am and what I stand for,” Leotta opened up. Indeed, they know Leotta, as she is a member of the chapter, and they had far fewer questions for her than they did for Sallerson.

Leotta stated that Vermonters’ freedom to have guns and the high volume of firearms in the state is the reason why the crime rates are so low.

Leotta believes that Vermont is a “microcosm” of the United States, so people come to Vermont trying to implement programs that fail.

“Our health care system was not broken until Shumlin came with [Health Connect],” Leotta said, just before saying that “they” want to install windmills on our ridgelines and that it was a “knife in her heart to see Vermont Yankee go.”

She believes that wind and solar power are nice “niche” markets, but she said that they are not sustainable for the future. She said Vermont needs something more permanent.

“Nuclear energy is a way,” she said. Leotta said she has lived in areas with nuclear energy and has never had any problems although others “conceived” issues.

Leotta then said that she is running on the idea that she will implement no new legislation. She wants to work with the laws that exist to fix Vermont’s issues.

One of the questions that Leotta did face was about Act 46, which calls for the consolidation of local school boards into one board. Leotta wants to give control back to the towns.

On the Gun Owners of Vermont website Leotta is listed as pro Second Amendment. Sallerson, along with Grad and Greshin, is listed as “extremely anti-gun.”

Grad and Greshin are expected to be at the group’s next meeting on October 14 to address a similar group of people. The local chapter of Gun Owners of Vermont meets on the second Friday of each month at the Warren firehouse at 6 p.m.