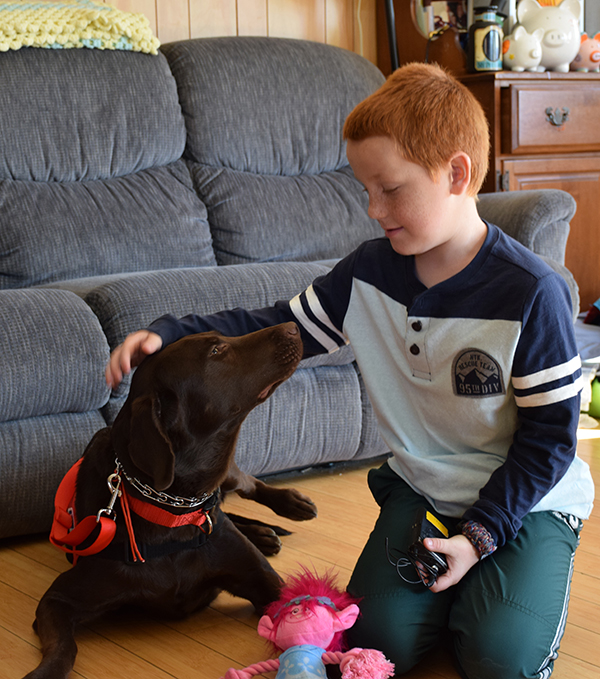 “Are you sure this isn’t a dream?” 8-year-old Aiden Heath asked his mom, Jenni Heath, shortly after he met Angel, his diabetic alert service dog.

Angel arrived in Waitsfield on October 10 after flying from Las Vegas, Nevada, to Manchester, New Hampshire, on October 9 and driving from Manchester to Waitsfield the next morning.

Waiting with the patience typical of an 8-year-old, Aiden bounced from the couch to the window to his mom and dad while waiting for Angel to arrive from Manchester this Monday.

RAN OUTSIDE IN HIS SOCKS

He ran outside in his socks when the car came up the driveway and stood motionless while the trainer brought out Angel. A smile broke over his face when Angel, a little shy herself, approached. His eyes lit up when he put his hand on her head.

Aiden has type 1 diabetes and told his parents when he was 4 years old that he wanted a diabetic alert service dog that can detect changes in his blood sugar levels well in advance of when he was symptomatic.
He saved every penny he had and this spring The Valley Reporter wrote about him rolling his saved coins and taking them to the bank in his red wagon, hoping to have enough to put down a deposit on a service dog. The dogs cost $15,000.

PUT DOWN A DEPOSIT

The story of the redheaded 8-year-old working so hard to save his money for a service dog touched The Valley and those beyond and a spontaneous fundraising effort led Aiden to exceed his fundraising goals.

He put down a deposit in March on a dog and soon learned that her name was Angel. She was purchased from and trained by Diabetic Alert Dogs of America in Las Vegas. Throughout the spring and summer his family received regular updates and pictures and videos of the dog while she was being trained to his scent. He spent a few particularly unpleasant days wetting cotton balls with his saliva at varying blood sugar levels so that they could be sent to Angel for her training.

All of that was worth it this week, however, when Angel came inside and began to get used to her new surroundings and to Aiden and his family. She was a little shy and Aiden was a little tentative, but that will change. That first morning, after being with him for only 20 minutes, she alerted that his blood sugar was low.

He beamed, as did his mother. Angel is now on duty.

Angel will accompany Aiden everywhere, like all service dogs. She will give Aiden some confidence and some independence and also allow his parents, eventually, to get some more sleep.

The parents of kids with type 1 diabetes are often up two to four or more times a night to check their child’s blood sugar and Aiden’s mom said his fluctuates a lot with no rhyme or reason so the addition of Angel to their lives is welcome indeed.