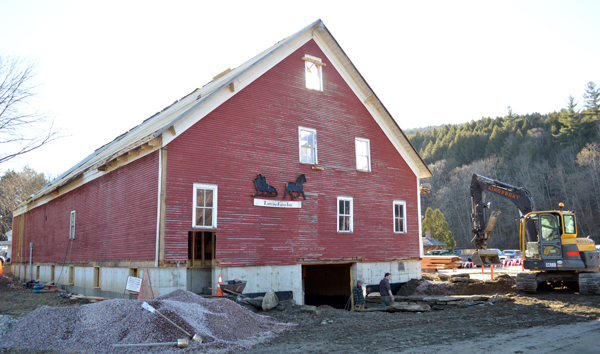 If buildings could speak the Lareau Farmstead would have a lot to tell its patrons about the history of the Mad River Valley.

The Lareau Farmstead has been nominated to the National Register of Historic Places and its qualifications are vast, both agricultural and architectural. Though many Valley residents may know the farmstead just as American Flatbread, it is now firmly taking its place in not only The Valley’s history but the country’s.

The farmstead is one of the oldest in The Valley, originally constructed in 1795. The original owner, Simeon Stoddard, was in fact a friend of Benjamin Wait. Wait recruited Stoddard to settle in the area to be the town’s first physician.

The farmstead stayed in his family for three generations until 1863 when it was sold to Abel Alonzo Kneeland. It changed hands again in 1940 when Philippe and Fleurette Lareau bought and gave it the name it goes by today.

Dan and Susan Easley, who purchased the property from the Lareaus in 1984, created an inn to meet the needs of the expanding ski and tourism industry.

The current owner, George Schenk, bought the property in 2001, after he had already leased the carriage barn to host American Flatbread.

The farmstead and its buildings are less revered as an architectural edifice because some of the buildings have been altered since their original construction. In the farmstead’s nomination, the dairy barn, although it isn’t the oldest structure, is more historically significant “due to its high degree of intact original design.”

The building was first constructed in 1795 as a 30- by 40-foot barn. In 1895, though, the barn was turned 90 degrees and expanded by 100 feet. While it is unfortunate that the building had to be slightly changed, the alteration does not come without historical significance.

The building had to be expanded to meet the needs of increased dairy production and populations during America’s age of industrialization. The barn, as it stands today, still has many features of the original construction which is rare even when compared to other barns in the Mad River Valley.

The Lareau Farmstead is a “good representative example of a small farm in Vermont that evolved over the 19th century and 20th century,” as stated in its nomination.

“The farmhouse and outbuildings embody the changing patterns of agriculture through their period of significance, most of the changes being made in the second half of the 19th century. Despite these changes, the farmstead has maintained its essential character and organization,” the nomination states.

This farm is not only representative of The Valley but also agricultural practices throughout Vermont.

Dairy farming is paramount to the history of Vermont and its people and in 1880 it was listed as the chief occupation of Mad River Valley farmers. Over time different pressures have been put onto dairy farms in Vermont, the most caused by the Industrial Revolution, which is why the Mad River Valley Agricultural Society was formed in 1872.

Schenk expects to know soon whether the nomination is accepted.