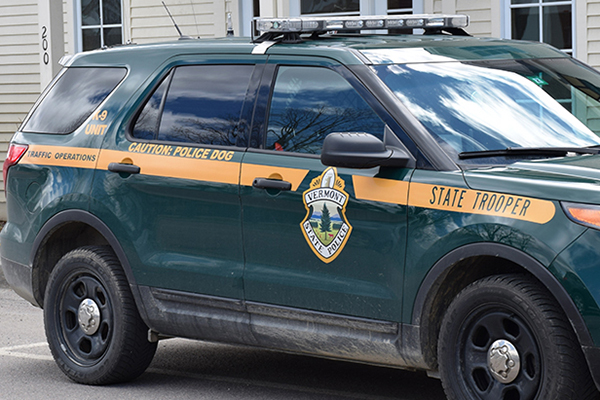 After a huge uptick of break-ins in the Mad River Valley, the Vermont State Police are going to pursue a new, nonconventional way of policing The Valley, something they have tried and used with success in the town of Cabot.

In recent months there have been many car and home break-ins and Sgt. Partin of the Vermont State Police, Middlesex barracks, said he and his troopers would be trying something different.

“It’s not a conventional way of policing. Instead, we’re looking for eyes and ears on the ground. We’re starting work on this in Cabot. Cabot has a lot of problems with assaults, drugs and call volume. It was lawless in some ways. And it is so far away from our barracks. We’ve been running this quasi-system in Cabot for four to five years and it’s working,” Partin said.

When The Valley started getting hit with all the recent burglaries and thefts, it seemed like a good time to try this new model in The Valley and perhaps in all of the communities that the Middlesex barracks covers.

It’s called Counter Criminal Policing and it is run by a couple of different principles. The first is intelligence, getting information from people in the community, having open communication with everyone in the community.

“What we did with Cabot was get together with stakeholders in the town. It wasn’t a time for community members to come in and complain or gripe about tickets of whether the state police were doing or not doing things. We can only do so much because of our manpower,” Partin explained.

“Counter Criminal Policing helps and empowers communities. And it gives them the ability to do more than they thought they could. In partnership with the community, it creates more effective policing,” he added.

To do so, state police pursue key leader engagement in a community.

“We’re a partnership with you guys. We invite you to get together so that all of us can come up with problem-solving ideas and plans where we can make this more effective. The stakeholders can provide resources and ideas and things such as Neighborhood Watch programs, cameras, places for cops to park and intelligence. People provide us with intel and we’re the conduit and someone in the barracks vets that info and turns it into something actionable,” he said.
“We use that intel for planning and sometimes it yields results. Sometimes it doesn’t,” he pointed out.

“When we tried this in Cabot, it certainly woke the community up and showed them that we have a presence there and the community is 100 percent behind,” he said.
In the coming weeks, the state police hope to begin such a program in The Valley, first identifying stakeholders and key leaders and having a meeting to identify real problems and potential solutions.