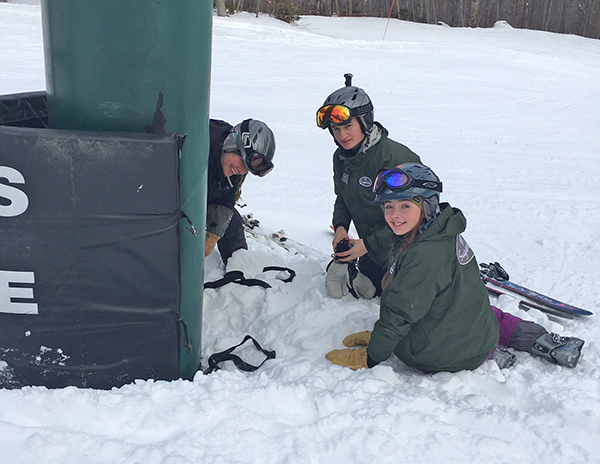 Any teenager in the Mad River Valley with a desire to help people and ski at the same time should look up the Sugarbush Youth Ski Patrol program.

Jack Donnelly, Warren, has been a patroller for 48 years and has seen many ski patrol programs throughout the country. He says that the unit at Sugarbush is one of the most well-trained groups he has ever seen. According to Donnelly, there may not be a better group to start with than Sugarbush’s.

The youth program grew out of a lack of young volunteers that Sugarbush was seeing. As a way to attract younger volunteers they started the youth program, open to anyone over 16, in 2013. Donnelly was hesitant as he had not worked with teenagers since graduating from college and hadn’t heard great things about today’s teenagers, but he agreed to lead the program.

Donnelly could not have been more surprised when every single teenager to come through the program has been a delight to work with.

“They are all hardworking, polite and driven to be the best possible patroller,” he said.

Although many people, adults and teenagers alike, may join the ski patrol for the obvious benefit of a season pass, they quickly realize that the job is more than that and more often than not they stay a patroller because they truly want to be on the mountain to lend a helping hand.

The youth ski patrollers do everything that a regular patroller would do, short of actual medical work for which they are not certified. They do normal practices with the rest of the patrollers; they learn and practice carrying wounded skiers down the mountain in toboggans, possibly one of the more standard but important part of the job.

“By the time they are old enough to be a full-time patroller, our goal is that they will have all the skills that they need and just step from one program into the other,” Donnelly said.

Although they have not had anyone in the program’s three years of existence graduate and step right into the regular patrol role, Donnelly says that it is coming very shortly.

In three years only one person has quit the program, but in all it has grown. There are now 18 kids in the program and nine on a waitlist.

Donnelly said that kids who come into the program don't know the full responsibility that could eventually be put onto their shoulders, but they learn quickly and it helps them both on and off the mountain.

Donnelly noted one instance in particular, when a parent of one youth patroller contacted him and said, “I don't know what you're feeding him, but it’s working.” That patroller actually changed his plans from going on to become a lawyer to getting his medical degree from Northeastern.

Another member that he noted specifically was a young girl who called him to join and said she wanted to eventually be an orthopedic trauma doctor. Recognizing the young girl’s maturity, Donnelly said yes only to find out that the young girl, Elizabeth, was only 13. Elizabeth is now 17 and a leader in the program.

“It’s been a real revelation to me that kids that young can be so dedicated to what they're doing,” Donnelly said, while adding, “If you listen to the radio or the TV you get this idea about teenagers that don't care about anything. Well these kids are the exact opposite.”

Donnelly said the ones who come into the program are personally motivated to do so and that all of the adult patrollers are happy to be working with them.