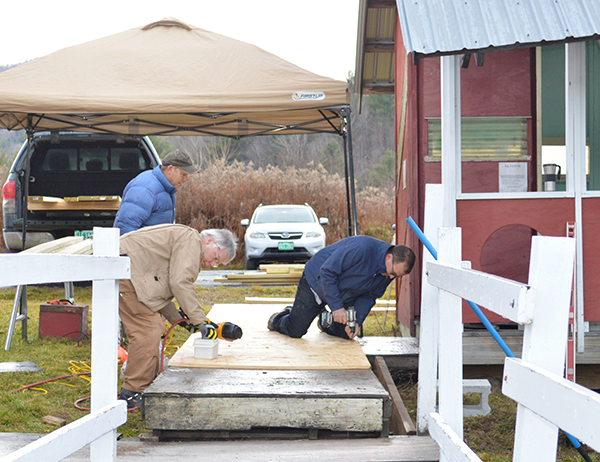 Skatium will be open to new group of customers this season as last week volunteers built a handicap-accessible ramp and sled hockey could be coming to The Valley.

The biggest proponent for the new ramp was Troy Kingsbury, Waitsfield, who was also one of the volunteers to help build it. Kingsbury knows firsthand how important it is for disabled children to have access to all sports; his son, Jakob, plays sled hockey.

Jakob had been playing hockey for three years through the Harwood Youth Hockey Program, but each year, because of a disability, he would fracture a leg playing the sport that he loved. Running sports are not an option for Jakob and he was reluctant to give up hockey altogether.

The Kingsburys found out about the Vermont Sled Cats, a sled hockey team based in Burlington, and Jakob decided to try his hand at it. Over the past three years he has stuck with the sport and last season he was nominated to the National Sled Hockey Development Camp. The camp was comprised of just 56 athletes from throughout the United States, and from that camp, the U.S. Paralympic Team and U.S. Development Team is picked.

Retiring from any sport is a hard decision for any athlete and a forced retirement can be daunting for an athlete who is not ready to give up the game. Jakob certainly did not want to stop playing hockey, and sled hockey has given him the opportunity to keep playing and the opportunity to stand out and succeed.

Kingsbury believes that there is a lot of opportunity to grow the sport in Vermont and the Northeast and hopefully the Mad River Valley can be a part of that growth.

Kingsbury’s idea is that there be smaller teams “under the umbrella” of the Sled Cats and they could travel with the team to games, because it is very hard to maintain a full travel team to compete in the Northeast Sled Hockey League.

The Mad River Valley team would be called the Central Vermont Pioneers. Kingsbury wants to expand the sport in The Valley with help from the larger teams, especially the Sled Cats. Vermont Adaptive Ski and Sports is based out of Sugarbush, and Kingsbury thinks that there are many disabled people who use them who would also be interested in the Pioneers.

Although they are trying to attract disabled athletes, the opportunity to play is open to all, disabled or not. They will hopefully have access to the equipment so many athletes can come and play.

Troy Kingsbury plays himself and said his first time on the ice with the veterans was a shock. He said that it is astonishing how fast and skilled the seasoned players are.

Anyone familiar with the rules of hockey has a leg up as almost all of the same rules apply to sled hockey. There are a few variations because of the different equipment involved, but it is the same layout. Kingsbury said that the Pioneers are currently working out a schedule for Skatium and he expects that practices will be midweek.