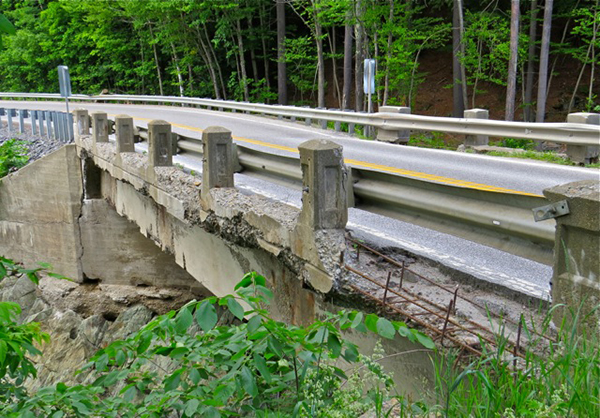 VTrans will hold a public forum to present its finding on the status of the bridge over the Mad River on Route 100B at the southern end of Moretown Village next month.

The bridge has been limited to one-way traffic since February. VTrans has now scheduled the release of its report, which will include options and alternatives, for January 17 at the Moretown town office at 7 p.m.

The bridge, which was built in 1928, is about a quarter mile south of Moretown Village. VTrans found it unsafe for two-way traffic last year, leading to the decision to make it one way and study it. The bridge decking and entrances were severely damaged during Tropical Storm Irene in 2011. The bridge was repaired and reopened shortly after the storm.

When VTrans met with the Moretown Select Board last February to discuss making the bridge one way, structures bridge maintenance engineer James McCarthy told the board that the agency had concerns about the structural soundness of the bridge. Concrete deterioration on the bridge was creeping toward the middle and the concrete posts were wearing thin.

Prior to closing the bridge to two-way traffic VTrans had considered several options to repair the bridge, such as installing new guardrails while maintaining the road’s two-lane capacity. “But the bridge is too narrow and can’t support anything new,” McCarthy said at the time.

The agency’s scoping study is looking at “doing anything from A to Z,” McCarthy said, including bridge replacement. If this is needed, the bridge would be closed temporarily.

Crew members spent time inspecting the area from within the river and will have collected data on traffic, roadways and environmental resources which will inform their overall study.