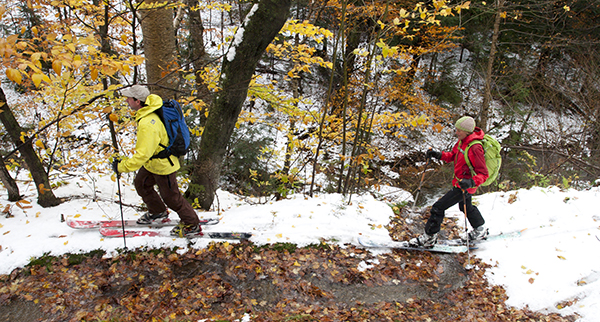 Mad River Glen marketing director Eric Friedman drove over the Appalachian Gap one night earlier this month and got down to the Mad River Glen parking lot, which he found full of people.

It wasn’t the first time he’s seen the parking lot full when the resort is not open. It happened again a couple of weeks ago when Mother Nature dropped lots of nice fresh snow on the Fayston ski resort and people who wanted to earn their turns headed to the mountain early.

“I was shocked to see so many people there parked and hiking. I thought we should open the bar,” Friedman quipped.

And, while Mad River Glen has always had (and still has) the reputation as a place where the cool people go to hike and earn their turns, the number of people hiking to ski has increased dramatically, to the point where there are legitimate safety issues, Friedman said.

“The prevalence of hikers has skyrocketed with the advent of better AT equipment. That was not the case that long ago. We’ve always had a big tele crowd that believed in skiing and earning their turns here. It was never really an issue – and now it is,” he said.

“Every ski area is now creating uphill routes specifically for people skinning up and catering to them as well. We toyed around with the idea. Mad River is unique in many ways, designating an uphill route for people just won’t work. They’re coming from everywhere, from App Gap, from the parking lot; some are coming in near the Rat Trail. It’s too hard to corral them,” Friedman added.

Mad River Glen’s trails are narrow and twisty. Friedman said they don’t want people hiking up such trails with skiers ripping around the blind corners and hitting hikers.

The official policy of Mad River Glen on people skinning uphill is that it is OK when the lifts are not running but not okay when lifts are running.

“We’re trying to educate people about this – where to park for example so that we can plow the parking lot. We’re telling people to please don’t bring their dogs. We’re nervous about the dogs getting hurt in the snow guns or snow cats or the other operations going on there,” Friedman said.

He said that it is amazing and worrisome that people are hiking up to the top of the mountain and ducking under the ropes and skiing over the high-voltage cords for the snowmaking guns with the skis with metal edges.

“They’re taking their lives in their hands,” he said.

When skinners are found hiking up the trails when the lifts are running, they are asked politely to leave, something Friedman said puts patrollers in a tough spot as some skinners are polite – others less so.

Another safety concern, he said, is people skinning up when the groomers are working. It’s dark and possibly snowing and the tracks throw up a lot of snow. People (and their dogs) are putting themselves in danger, especially if they are in the middle of the trail without lights.

“It puts the groomers on edge a little bit, about how they’d feel if they hit somebody,” Friedman said.

“Our groomers take a great deal of pride in the work that they do preparing this mountain for the skiers. It bums them out when people come here for first chair and they get here and the mountain is all tracked up and the freshly groomed stuff is all tracked from early hikers,” he added, noting that a fair percentage of the early hikers are shareholders and pass holders.