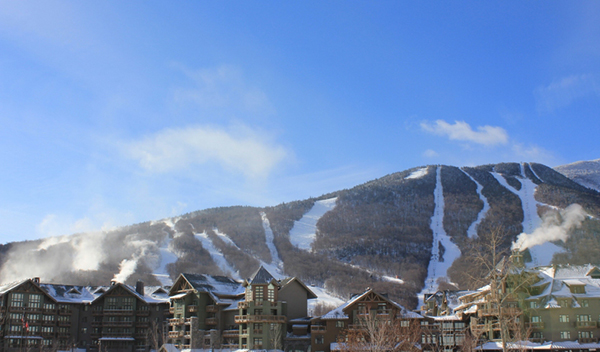 (Printed courtesy of the Stowe Reporter.)

When’s the last time you ever saw something go down in price in Stowe? Just wait until next year, when it could cost half as much to ski and ride at Stowe Mountain Resort as it does this season.

In a memo to resort employees, Vail indicated it expects to close on the deal following this current ski season, pending state approval. If approved, Stowe will join 10 well-known destinations owned by Vail Resorts, and is the ski giant’s first East Coast mountain.

The Vail acquisition would also bring Stowe into the Epic Pass family, which will mean huge savings for skiers and riders used to paying Stowe’s prices, among the highest in the nation. An Epic Pass costs about $800 and gives almost unfettered access to all Vail-owned resorts. A full-access Stowe Mountain Resort season pass costs more than double that.

For its $50 million, Vail will get all the assets related to mountain operations – lifts, snowmaking, maintenance and the like – as well as base area skier services like food and beverage, retail and rental, ticket office and ski school.

According to a statement from Vail Resorts, AIG, the resort’s longtime owner, will retain its ownership on much of the real estate, such as Stowe Mountain Lodge, Stowe Mountain Club, Stowe Country Club and “certain real estate owned and held for future potential development.”

“With the investments in both mountain infrastructure and base area facilities that AIG has made over the years, Stowe Mountain Resort has become the premier, high-end resort for East Coast skiers and snowboarders. We look forward to working with AIG to continue enhancing the guest experience and to ensure the resort’s long-term success.”

The sale is subject to Vermont state administrative review, and the final sale price is subject to change, based on how much revenue the resort brings by the end of this current ski season. Also, much of Stowe Mountain Resort is on land leased from the state, one of seven Vermont resorts with such an arrangement. The leases are long, stretching as far as the 2050s.

According to Michael Snyder, commissioner of the Vermont Department of Forests, Park and Recreation, before a sale is final, he has to sign off on a reassignment of the lease.
“Being the landlord, representing the people of Vermont, I have particular interest in this,” Snyder, a Stowe resident, said. “We will do due diligence to make sure they have the financial wherewithal to honor that agreement.”

He said it was important to note, however, that the deal is not done until the ink is on the lease. The state, as the landlord, has the opportunity to match Vail’s offer. He said he had an “excellent meeting” this week with the parties and “shared with them that this is a really big deal.”

Stowe held a “town meeting” gathering of resort employees Tuesday night, but the press was not invited, and efforts to talk to employees after the meeting were rebuffed. The memo to employees from Vail explicitly told them to redirect all media inquiries to upper management.

“As part of this process, we are committed to managing and operating the resort locally with critical leadership and operational functions residing at the resort,” the memo said. “We will be retaining the vast majority of the resort’s year-round staff and will be working with AIG and the Stowe leadership team in the coming months to set the right long-term structure for the organization. Operations at the resort for the remainder of the 2016-2017 ski season will continue in the ordinary course, as will future summer and winter seasonal hiring.”

Former Fayston resident and Sugarbush president Blaise Carrig, a ski industry veteran and Vail Resorts’ senior adviser, will be working with the transition, which includes talking to Stowe employees about their futures. He said he knows in times like this, there might be uncertainties about the future and the acquisition’s impact on jobs, the economy and infrastructure, both public and private.

(Printed courtesy of the Stowe Reporter.)