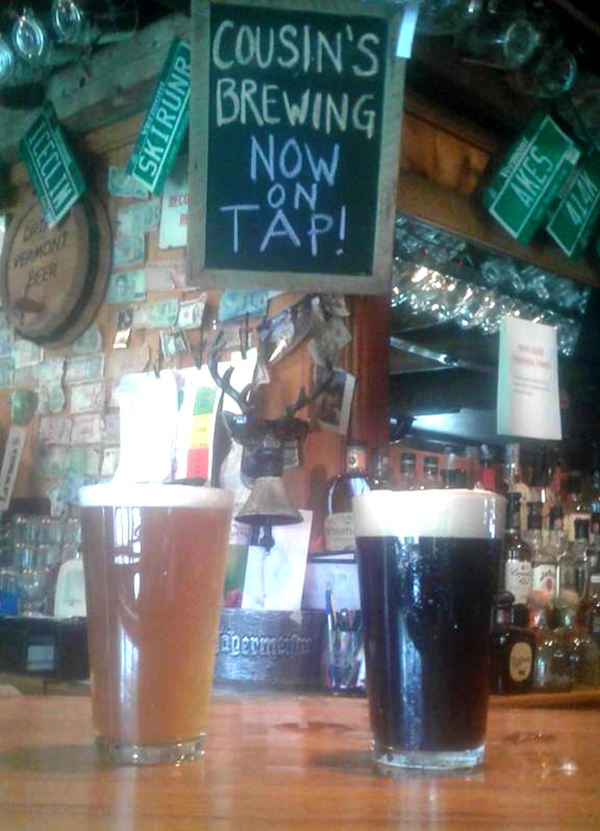 John Morris has been trying to start his brewery for three years and this past month he has finally been able to pour the first glass.

After years of battling with the state and federal government, Morris has received what he needs in order to start his brewery, Cousin’s Brewing. The operation will take place next door to his restaurant, Localfolk Smokehouse, in Waitsfield.

Morris said that beer has been a passion of his since he opened up his restaurant. Twenty years ago, when most restaurants in the area would have just a few taps, he put 16 taps in the Smokehouse and now they have 25.

Finally, a few years ago, business at the Smokehouse was doing exceptionally well, many of his friends were into brewing and he thought he was in a good enough place to start himself. He could not have imagined what ensued.

Morris said he figured it would take about a year to get up and going. Between background checks for the federal brewing license and local permitting, he knew it would take some time. He did not expect a three-year battle.

He was close to making his yearlong timeline. He received the federal license with no hiccups and Morris said that two years ago the state approved his septic design and gave him the OK to start brewing. However, while he was renovating the space and putting in his equipment, the state called back and told him, in fact, he couldn’t start.

“From there it proceeded to be a nightmare of the state bureaucracy and ineptitude on their part from top to bottom,” Morris said.

Morris, who has a three-barrel brewery, said the state kept insisting that his designs were inadequate for a seven-barrel brewery. It took six months to sort that out, he said.

Morris’s permit doesn’t allow him to brew seven days a week, but the state insisted that he build a water treatment system that would be able to handle a seven-day-a-week operation. Morris said that he ended up overbuilding his treatment system to handle brewing five days, Monday through Friday, even though he doesn’t have the equipment to do so.

After that debacle, the Water Supply Division said that he had to hook onto a municipal system, rather than staying on his personal well. Luckily the state let him stay on his own well because the water is especially high quality for brewing.

With endless paperwork and a two-hour conversation with the agency, he convinced the ATF that he should not have to surrender his permit.

“That took us into the fall and then I was sick of it for a little while. So I took a break from it and then you know we started breathing basically this past month,” Morris said.

Morris can finally get to the fun part. He and his partner, Josh Wedell, have two brews and are working on a third. They currently have Tolerable Pale Ale, a 5.8 percent easy drinker with four different malts and six hops.

They also have Big Brown Cousin, a heavy-duty brown ale Morris explains. The next flavor they are working on is a pilsner.

Their beer is only being sold at Localfolk Smokehouse and they are just barely meeting the demand. Many other establishments would like to offer their beers, but they will simply have to wait.