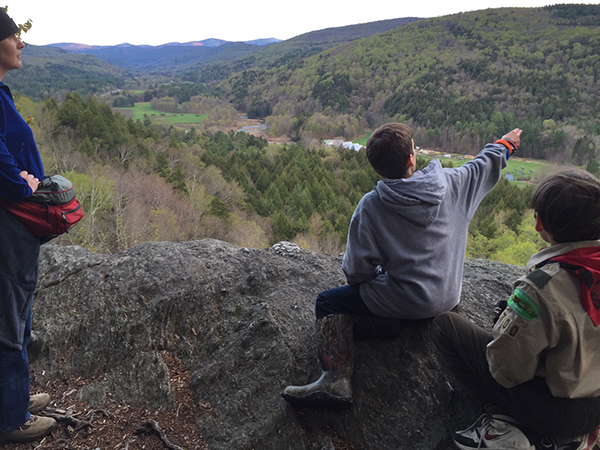 The Waitsfield Select Board voted 3-2 to accept the donation of a 2.3-acre parcel of land from Eric and Greg Haskin that had previously been owned by their parents, the late Eleanor and Dana Haskin.

The 2.3-acre parcel abuts Waitsfield’s Wu Ledges town forest, a popular recreation area. The Haskins offered the parcel to the land earlier this spring. The select board discussed it at an April meeting but was unable to make a decision and the matter was pushed off to this week’s May 8 meeting when all board members were present.

Present to discuss the matter with the board this week were Conservation Commission vice chair Chris Loomis and Conservation Commission member Ted Joslin. They reported that they had done the homework requested by the board the prior month and had identified abutters and ascertained that the parcel was indeed a former spring parcel which still had a spring tile and pipes on it.

As such, Joslin said, the property would never be developable but noted that it was an important addition to Wu Ledges because it is already being used by the public for access.

Board chair Paul Hartshorn asked whether adding the parcel to Wu Ledges would add more traffic through the cemetery on East Warren Road.

“Will you be putting up signs warning people to stay out of the cemetery?” he asked.

“There are already signs there and some people do use the cemetery road for access even though there is a gate,” Loomis said.

“So you’re asking us to put up more signs?” Hartshorn asked.

“If the select board is going to ask us to put up more signs, we will do it,” Loomis said.

Joslin reiterated the value of the parcel on its own in particular, but also as a potential bridge between another parcel and Wu Ledges.

Currently access to Wu Ledges is officially through the top of Hastings Road where there are three parking spaces and through Pine Hill Lane where there are two parking spaces. Board member Anne Bordonaro asked if those were the only official accesses and Joslin explained that he had taken board member Sal Spinosa to see the official and unofficial accesses. Joslin and Spinosa walked through Ruth Pestle’s property to get to Wu Ledges and also accessed the forest from land behind Our Lady of the Snows.

Spinosa said that he was very favorably impressed by the Wu Ledges, having never been there before. He said that while he understood the value of the 2.3-acre parcel on its own, he was also cognizant of the fact the access from East Warren Road is going to require some other piece of land or an easement or more parking.

The board discussed the fact that access to the Wu Ledges forest is limited by parking and noted that if people could park in the village, they could walk to the existing legitimate accesses – although it is not a short walk from Bridge Street to Pine Hill Lane.

Board member Darryl Forrest made a motion that the board accept the donation which Spinosa amended to include “accept the donation when the title search comes up clean.” That amendment was accepted and board chair Paul Hartshorn, noting that he was expecting the other shoe to drop in terms of people wanting the town to take more land off the tax rolls, offered a second amendment calling for accepting the donation and creating a five-year moratorium on the town buying or accepting any further gifts of land.

Bordonaro expressed discomfort with the town binding itself to such a moratorium as did Spinosa and board member Kari Dolan. That amendment was voted down and the motion to accept the donation passed 3-2 with Forrest and Hartshorn voting against accepting the land.