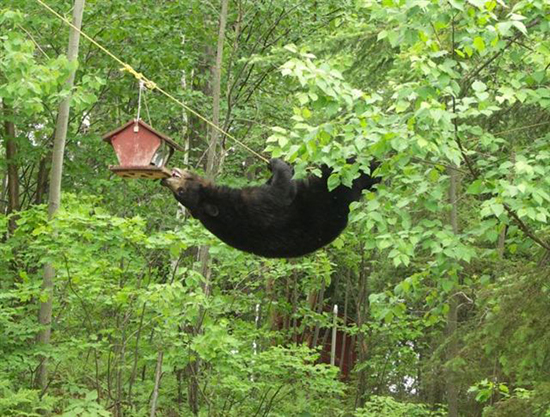 Black bears have arisen from their winter slumber and are once again roaming the landscape looking for food. The Vermont Fish & Wildlife staff is gearing up for what will likely be another record year for bear conflicts. They are asking the public to help keep Vermont’s bears wild by removing any potential food sources that would cause them to associate people with food.

“The number of bear complaints we’ve received has increased nearly every year for more than a decade,” said Forrest Hammond, Vermont’s lead bear biologist. “A large and healthy bear population is butting up against an increasing number of people who have built houses in the woods, fragmenting bears’ habitat and attracting them with backyard food sources. The bears are not going to change their behavior so it’s up to us to make the change.”

• Remove food sources that might attract hungry bears. These include pet food, dirty barbecue grills, garbage, compost and campsites with accessible food and food wastes. Birdfeeders are one of the most common bear attractants, so remove all birdfeeders and clean up seeds beneath them.

• Store garbage containers in a garage, shed or basement and put garbage out the morning of pickup rather than the night before. Remove the garbage as often as possible.

• Maintain a compost bin that is as scent free as possible by adding three parts carbon-rich “brown” materials like dry leaves, straw or ripped up paper for every one part food scraps or “green” materials. Turn the pile every couple of weeks and bury fresh food scraps down in the pile to reduce their attractiveness. In backyard composters, avoid composting meat, dairy or overly smelly foods.

• Keep a respectful distance from any bears. If a bear is up a tree near the home, bring children and pets inside. Never approach bear cubs or attempt to “rescue” them if found alone. Those who see a bear in a residential area or encounter an aggressive bear are asked to contact their local warden or report the bear at vtfishandwildlife.com.

“It is extremely difficult to relocate a nuisance bear far enough that it doesn’t return,” said Hammond. “Sadly, these bears sometimes need to be put down to protect human safety. In Vermont, we treasure our wildlife, so it’s up to people to avoid attracting bears before a bear becomes an issue.”

Residents are required by law to remove bear attractants and are prohibited from killing problem bears without first taking extensive nonlethal measures.