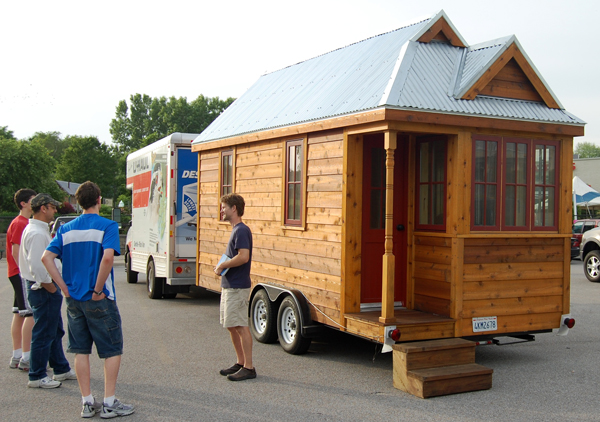 The Mad River Valley Planning District (MRVPD) has continued to work with local organizations to create a tiny housing solution to affordable housing in The Valley.

Planning district community planner Kristine Keeney is currently finalizing a housing study of the Mad River Valley and it will likely find that affordable housing is still an issue in The Valley. The study is an updated version of a similar study conducted in 2006.

According to the 2015 Vision and Vitality series, affordable housing is one of the key barriers when employers are looking for help. The planning district believes that tiny houses could be one possible solution.

However, there is currently no easy path to building a tiny house. Many towns do not know how to zone for them and many banks will not finance the project, leaving prospective buyers and builders in a hole.

Keeney said that in order to build a tiny house, somebody most likely needs to have a large amount of cash on hand or they could take out a personal loan.

Keeney and the planning district are currently working on a “pilot project” that would get one tiny house into The Valley and pave the way for future projects.

Keeney said that there is currently a lot open in the Verd-Mont Mobile Home Park in Waitsfield and that she has discussed the idea for a tiny house with Downstreet Housing, manager of the park; however, they will not hold the spot open if another taker comes along.

Keeney has also worked with Northfield Savings Bank to find out if they would consider financing a tiny house, but she currently does not have the answer. In order to find out she needs to work with an appraiser to see if they would assess a tiny house and, if so, how much would one be worth?

Northfield Savings Bank would then be able to consider the project.

“We’re basically trying to set up a pathway for people to buy a tiny house,” Keeney said. The planning district does not plan to own and sell a tiny house.

Keeney is hoping that tiny houses can become a more normalized option for people trying to move to The Valley. The planning district has identified two other sites in The Valley that could be used for a planned unit development of tiny houses.