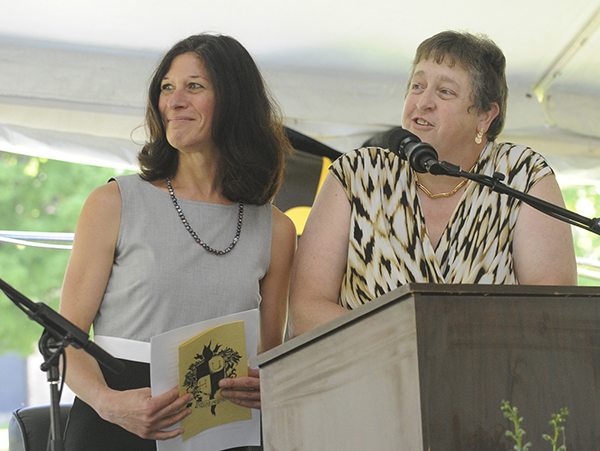 The pair was honored with the award at Harwood this week on June 6 when they received the 2017 Robert F. Pierce Secondary School Principal of the Year Award for 2016-2017 from the VPA.

Harwood Unified Union School District (HUUSD) Board member David Goodman and Washington West Supervisory Union Superintendent Brigid Nease praised the principals for their work at the school and with students. Harwood students praised the co-principals for how they kept the school together and as strong as possible last fall when five students died in a car crash. The entire school recognized the principals at a recent senior assembly.

Atwood and Rex will officially receive the award at a VPA meeting in August at the Grand Hotel in Killington. The 2017 VPA Leadership Academy will feature keynote speaker Jimmy Casas, Senior Fellow at the International Center for Leadership in Education, speaking on “Moving Beyond the Status Quo.” There will also be seven learning strands for school leaders on topics such as Building Capacity, Technology, Literacy for Leaders, Resilient Schools, Power Dynamics. Proficiency-Based Learning and Developing District Leadership. More than 250 school leaders will gather for the three-day event in Killington, August 1, 2 and 3.