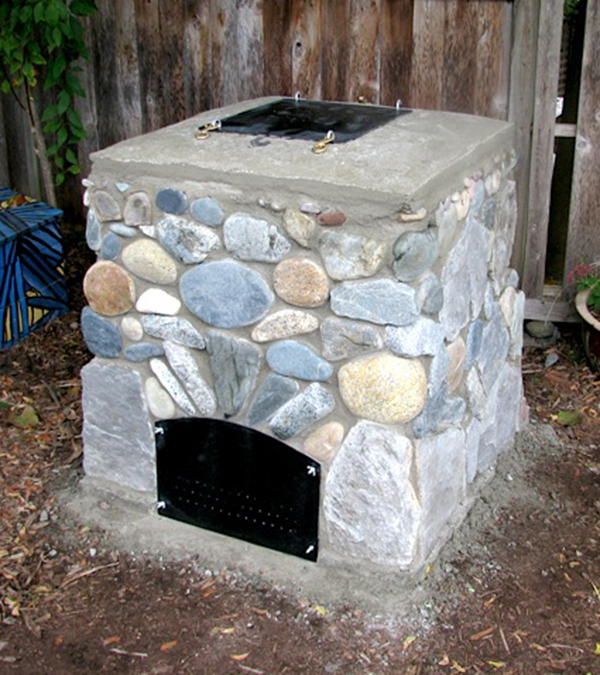 At first the bear(s) only tipped over my compost bin once a year in the fall. Assuming they were hungry before hibernation, I paid it little mind.

Then last fall my compost bin was upended several times a week. The bears denned up and I forgot about it until this spring when the bears woke up and since then have been tipping over my black plastic Soil Saver bin with so much regularity that there’s not much compost left (the dogs visit after the bears tip it over).

We’re avid composters and recyclers at my house. We pride ourselves on how little trash we make and how much we recycle and compost. We’re careful with the packaging that we buy.

Yet, last week it occurred to me that I might be creating the dreaded “nuisance bear,” a bear that becomes habituated to seeking out food from humans. This is a real problem. It’s why people are told to remove their bird feeders from April 1 through November 1. Bears that become accustomed to humans can become a problem and that can lead to their demise.

Not wanting to be the cause of nuisance bears, I reached out to Cathy Jamieson, solid waste program manager for the Vermont Department of Environmental Conservation, and her co-worker, Josh Kelly, materials management section chief.

“If a bear is already coming to your property regularly, stop whatever activity is happening that is attracting the bear,” Jamieson said.

“If you don’t have a bear problem, manage your compost pile so that it does not attract bears,” she added.

That means appropriately layering in three times as much brown material (yard waste, dried leaves from the fall) as food waste. That means turning compost regularly and making sure the bin has the right mix of oxygen and water. Included in the definition of brown material leaves, grass clippings, wood chips, sawdust, shredded or cut up egg cartons, tissue paper, paper towels, paper bags and cardboard rolls.

At our house, we’ve avoided commercial cardboard and paper towels due to concerns about what chemicals might be in them that would then end up in our garden and vegetables when we transferred our compost to the garden.

Our compost is composed primarily of used coffee filters, broccoli stalks, onion skins, lettuce butts, pepper seeds and other odds and ends of vegetables. We do layer in brown vegetable matter, but obviously not enough to keep the compost from smelling good to bears.

And smell is key. That’s what attracts bears to backyard compost bins. They are particularly taken with melon rinds, by the way, I learned.

We’re not alone in the problems we’re encountering this year, according to Kelly. He said he’s regularly getting calls about bear/human interactions.

“I’m not a bear biologist, but some people think that the drought of last year impacted bears’ food supplies and they are aggressive because of it this year,” Kelly said.

Asked how long it would take for a bear to forget that my backyard was a food source this year, he said he didn’t know.

He also suggested that some people have had luck with a composter called a Green Cone which has a large bulb attached to a long cone. The bulb is buried in the ground and is crosshatched and partially open. Food waste (including meat and bones) is put in the opening at the top of the tube and drops down into the bulb. The cone is double-walled, which draws oxygen in and accelerates the decomposition process. Beware, bears can and do pull the cones open, though.

After July 2020, it will be against the law for people to put food and plant waste into Vermont’s landfills and waste collectors will be charged with finding ways to accept both food and land waste at transfer stations and via residential and commercial waste hauling services.

Jamieson suggested that people whose compost is attracting bears could seek out a local, centralized food waste collection system. No such place yet exists in The Valley.

Forrest Hammond, black bear project leader for the Vermont Fish and Wildlife Department, acknowledged the inherent conflict between people living in bear country and Vermont mandating that no food or plant matter go in the landfill in 2020.

“If bears are a problem to your composting, we recommend you change your strategy,” he said, citing the correct ratio of food waste to brown waste. He also suggested burying things and said that when he was growing up, his family would just dig a deep trench in the garden, about 12 to18 inches deep and bury the smellier items such as lobster shells and chicken skins.

People, he said, are creating problem bears by providing them with food on a regular basis.

“Bears are naturally very wary of humans, but it’s natural for bears to be hungry in the spring. If they don’t get a negative response the first time they seek out the food, they’ll be back,” he said.

A negative response, he pointed out, might be an electrified fence around the compost bins.

John Malter, director of the Mad River Resource Management Alliance, concurred with the others that this is a particularly challenging year for bears and composters to co-exist. He reiterated the need to stop composting if bears are repeatedly visiting the bin. He said that burying food works and also mentioned the Green Cone as well as something he referred to as the “ultimate bear-proof compost bin” (Google that for a picture). It’s a mortared stone bin set in a poured concrete foundation. Within the four walls of the stone bin is one iron door on the front to remove compost and a similar hatch at the top to put waste in.

“With warmer winters, bears are up during the winter and foraging. There is less available for them. They are going to seek out compost if they can smell it and get to it,” Malter said.

He also suggested an electric fence around the compost bin and perhaps the garden to keep bears away. Barring that, he said, take compost to a centralized collection facility or dispose of it with the garbage.

The Mad River Resource Management Alliance is hosting a composting workshop on June 17 at the Waitsfield town office from 10 to 11 a.m. People will learn the basics about composting and will have a chance to purchase a Soil Saver compost bin at a reduced rate. To preregister send name, address, phone number and email address to John Malter, MRRMA, P.O. Box 210, Waterbury Center, VT 05677, or email This email address is being protected from spambots. You need JavaScript enabled to view it. by June 14, 2017. Those interested in purchasing a Soil Saver Bin should include that with registration.