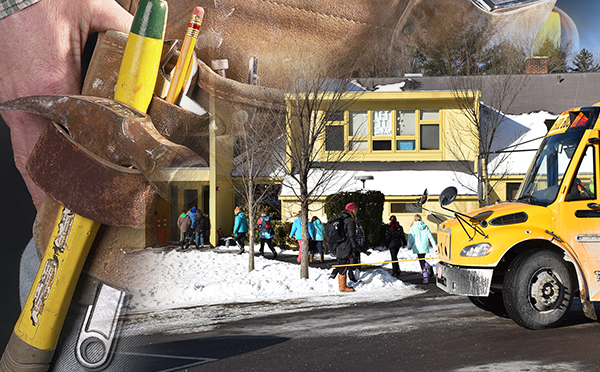 Contracts totaling $2.55 million have been signed for a repair project at Warren Elementary School and contractors will be on site staging for the project on June 19. Work will begin on June 26.

The work entails extensive work on the building envelope, including siding, windows and roof, plus the HVAC system, according to the school principal, Beth Peterson.

The work must be completed by August 26 before teachers and students return for the upcoming school year. The project went out to bid earlier this year and the bids that came back were about $500,000 over budget.

That led to a series of cuts to the project so that its scope became primarily the building envelope rather than interior work, Peterson explained.

The school district has signed two change orders from the original bid of $2,455,000. The first change order reduced the bid by $505,391 and the second increases it by $15,351. There is a separate contract for some $58,000 for abatement of hazardous materials.

The first change order removed a great deal of interior work that had been included in the original bid documents. Those reductions include project components such as deleting interior construction on the second floor to create a hallway and other changes. Deleting that also meant reducing demolition and reconstruction costs.

Peterson said that while the project had been reduced, the need for the work had not been mitigated.

“It’s not that that work is not necessary. We need a lot more than this project is doing. But the two bids came in over what we budgeted for the construction piece so we had to make changes to the project to stay within budget. Those changes were all interior, primarily in the front of the building and increasing security to the front of the building. Upstairs there were egress issues through the classrooms to get to the egress and we had expected to create hallways. But it turns out that the current configuration is grandfathered by the fire marshal and if we don’t do anything we’re fine upstairs. The minute we start doing something upstairs, you’ll need the hallways back,” Peterson said.

When her office (currently at the back of the building) was slated to be moved to the front of the building, she and administrator Heidi Greene expected to move into a construction trailer. With that work reduced, she expects to work from her existing office and the library and from home as needed. She lives in Waitsfield.

“I’ll be 10 minutes away if I’m needed and when I’m there I’ll wear a hard hat. Heidi will also be there some of the time and Lloyd Cuenin, our custodian, will be the real person living through it along with our tech guy,” Peterson said.

She will be getting weekly updates from the contractor on Tuesdays.