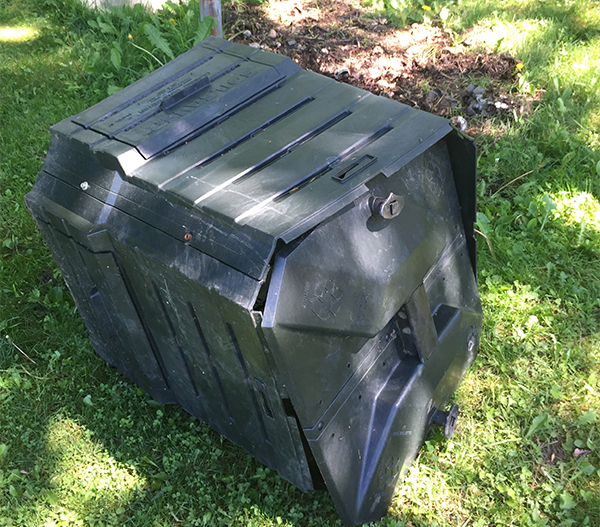 Last week The Valley Reporter interviewed state wildlife officials and solid waste officials about the inherent conflict between state laws mandating that food and yard waste be banned from landfills in 2020 and the need for people to avoid creating nuisance bears.

When people compost at home, their home compost bins can become an attraction to hungry bears, both when they come out of hibernation and food is scarce but also throughout the summer if the bears get used to compost bins as a source of food. Nuisance bears lose their fear of humans and human interaction – which can be fatal for them and dangerous for humans as well.

Because transfer station operators will be able to charge people to bring food waste to dispose of at their facilities, that may increase the number of backyard composters. To that end local solid waste alliances such as the Mad River Resource Management Alliance (MRRMA) is offering a home composting workshop.

But, is that workshop and the tools being imparted in it the right approach to home composting? The Mad River Resource Management Alliance’s press release announcing the composting workshop begins with these words:

“So, if you have any banana peels and apple cores hanging around and you don’t want to throw them into the trash any more, we have a program coming up to help you out.”

Fruit peels, according to Forrest Hammond, bear project leader for the Vermont Department of Fish and Wildlife, are one of the most attractive scents for bears foraging for food.

The MRRMA press release about its workshop (June 17, Waitsfield town offices from 10 to 11 a.m.) also notes that black plastic Soil Saver compost bins will be for sale at half price. Those compost bins, by MRRMA manager John Malter’s admission, are definitively not bear proof.

Many composters eschew black plastic bins, or any enclosed bin, in favor of open bin composting or open pile composting. Many people have success by creating a three-sided pallet bin built into a hillside, with chicken wire encasing the pallets. Some find greater success using two chicken wire encased pallet boxes side by side, one with composting food waste, the other with yard and garden waste to continually add to the food side.

Some, like Warren resident and local composting guru Richard Czaplinski, use piles of compost on the ground with great success. He advocates for open spaces where people can envision two 5-foot-diameter circles side by side. These two spots are where a first and then second compost pile will be built after the first one has run its course of temperature rise and fall.

For Czaplinski, the secret to the compost degrading is using materials properly to get the temperature to rise sufficiently to biodegrade the materials. Here are the steps he suggests to create the right temps.