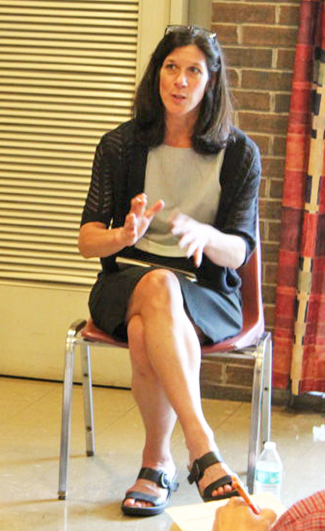 Harwood Union co-principal Amy Rex resigned this week and Washington West Supervisory Union (WWSU) Superintendent Brigid Nease said that Rex is not the only educational leader in the district who is contemplating resigning.

Rex has been co-principal at Harwood Union since 2012. She will take up a new position as Monument Mountain Regional High School principal for the coming school year. Earlier this month, she and co-principal Lisa Atwood were named principals of the year by the Vermont School Boards Association.

In an announcement to WWSU teaching staff on June 20, she said she was resigning due to issues with the board. Her June 19 letter of resignation to Nease expands on that, detailing recent issues in governance within the district and within the Harwood Unified Union School District (HUUSD).

Specifically, she references a May 24 board meeting where tensions between board members came to a head over the issue of board conduct. Parts of that meeting were conducted in executive session to discuss “personnel matters.”

“Amy always intended to move on to another position in two years. After the May 24 board meeting she made up her mind to look for a lateral move. It’s been a tough year, that’s no secret to anyone. On June 2, she found a position being offered in Massachusetts, a place with which she is familiar and that is not too far from her parents, and she applied,” Nease said in an interview this week.

The HUUSD Board met again on June 14 and at that meeting the board received a five-page letter from its Fayston representatives, Jill Ellis and Heidi Spear, challenging the board’s May 24 executive session as well as board member conduct and the willingness of the board to work with its member communities.

Rex, in her letter of resignation, noted that after she made her decision to apply for the new position in June, she was still hopeful that things would improve locally.

“On June 19, they offered me the position. In the time between June 2 and June 19, I was hopeful that the tides would turn and my faith would be restored. I was hopeful I wouldn’t need to make the decision I truly didn’t want to make. Then there was the June 14 HUUSD board meeting and the presentation of a memorandum, which further confirmed my concerns,” she wrote, referring the Ellis-Spear letter as a memorandum.

“As events continued to unfold – behind the scenes and in the media – I began to think more deeply about the adverse impact these events could have on our school and my capacity to lead with optimism,” Rex said. She referenced a section of her professional digital portfolio where she focuses on “appreciation for community.”

“I am concerned that because of the existing dynamics of the HUUSD board, a tenor is being promoted across the HUUSD communities that is counterproductive to this ‘appreciation of community,’ and thus to the well-being of the school. A tenor that devalues our intent and wrongfully questions our integrity. A tenor that inaccurately describes conditions in our school. A tenor that creates an unappealing, shameful characterization of Harwood. A tenor that will divide a community around the very cornerstone it should embrace – our school,” Rex explained in her letter.

Nease said that the last two board meetings were just part of the cumulative impact of this entire school year and led Rex to the position in which she found herself.

Nease, in an interview after Rex resigned, reiterating comments made at a June 14 board, said that the supervisory union is imploding, something she said she felt was pretty self-explanatory at this point.

“My need to have that executive session on May 24 was a legally necessary executive session that dealt with matters of personnel contracts, plural. Amy is not the only leader wanting to leave. I shared a number of personal things about personnel and the decisions they were contemplating inside of that executive session. In that executive session, I appealed to the board and said that in my opinion, after being here for eight years, that the supervisory union is imploding – meaning that it is falling apart. And I all but begged them to get together and reboot this thing. That hasn’t happened,” Nease said.

The Valley Reporter has questioned the May 24 executive session, which began with a legitimate discussion of personnel matters, but shifted into a discussion of board conduct, according to the Spear-Ellis letter and other sources.

Nease said that without going into specifics, “Folks wanting to leave are directly caused by the dysfunction of the board.”

“Board conduct was a topic that was discussed because it was a causal factor to why folks on the administrative team are thinking Washington West is not a desirable place to work. Amy is not the only one,” Nease said.

“I’m heartsick that Amy is leaving us. I understand that she needs to do this for her personal well-being and career. This is coming after a tough year when quite frankly we didn’t need any more tough, did we?” Nease asked.