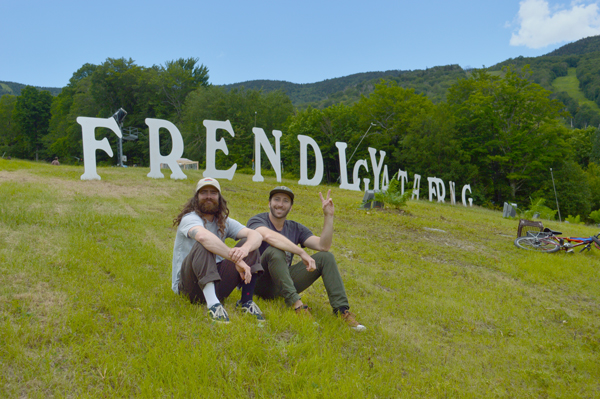 That’s the attitude that Jack Mitrani brings to Frendly Gathering, the music festival that he and his friend Danny Davis started seven years ago. The festival will be coming to the Mad River Valley this weekend for the first time.

Starting on Thursday, June 29, upward of 2,000 people will be flooding into Mt. Ellen’s parking lot to camp in RVs and sprawl their tents throughout the hillside. Festivalgoers can come for the entire weekend or they can get a day pass on Saturday.

Mitrani lives in Burlington and Davis arrived in The Valley from Burlington last week. When Davis arrived, he said he went straight down to southern Vermont and began to pack everything he could into U-Hauls to move it up to The Valley.

The Frendly Gathering has been housed at Timber Ridge in Windham, Vermont, for the past seven years, but the festival simply outgrew the space.

On Tuesday, June 27, their crew was hard at work setting up the various music venues that will house 24 bands between Thursday and Monday. The two founders said that it’s the family that has surrounded the festival since its inception that takes the pressure off them when planning.

Mitrani explained that it was much harder in the beginning when both he and Davis were far more involved in the planning and setup of the event. Over the year they have learned to take themselves out of the picture at times and let the professionals do the work.

Mitrani and Davis said that they try to participate in the festival as much as they can while still running it.

“Really, when it comes to life is when the tents start pouring in,” Davis said, and he and Mitrani will be right alongside their campers in their own tents. However, they are still trying to make sure that everyone is having a good time throughout the weekend.

It’s easy to say that Davis and Mitrani are excited to be in The Valley. “We couldn’t be happier, man. I mean this view for the past week has been our dojo,” Davis said while motioning to The Valley’s skyline.