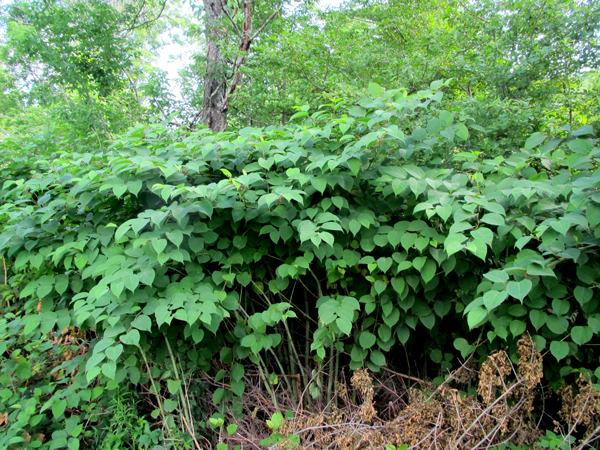 The Waitsfield Conservation Commission will try a pilot project to contain the invasive plant Japanese knotweed along the Mad River on the five-acre Austin parcel, immediately north of the Lareau swim hole.

Conservation commissioners Mark Haberle and Tom Dean explained the pilot program to the Waitsfield Select Board on June 26. The select board approved the commission’s plan to go forward with the project, which will cost $6,390 and will be paid for with funds in the town’s forest stewardship reserve fund, which holds the funds paid to the town from timbering in the Scrag Municipal Forest.

The Austin parcel has a widespread knotweed infestation as well as other invasives, nonnative plants such as common buckthorn and honeysuckle.

The pilot plan, which will be executed by Redstart, is a two-year program aimed at controlling the knotweed by isolating it to a strip along the river’s edge. Mowing between that strip and the interior of the parcel will be used to control the other invasives and to keep knotweed down.

On the interior of the parcel, native riparian saplings will be planted to create a canopy of shade trees to block the invasives from getting sun. Additionally, the knotweed will be cut in late August and again before the first hard frost. Both times the stumps of all the invasives will be treated with herbicides. The herbicides to be used are Rodeo (active ingredient glyphosate) and Polaris (active ingredient imazapyr). It will be applied in a backpack sprayer and with a motorized sprayer.

That protocol will be used in 2017 and 2018.
Haberle and Dean explained the pilot to the select board as well as the process of soliciting bids and selecting Redstart.

Haberle pointed out that Waitsfield’s Town Plan calls for controlling invasives on town-owned land and told the conservation commission this pilot program is a good start.
Select board members questioned the efficacy of the proposed plan given how pervasive the knotweed infestation is along the Mad River.

Haberle acknowledged the extent of the problem and said that it is nonetheless important to make an effort. He said that the contractor anticipates a 98 percent success rate in killing mature common buckthorn plants using cut stump treatment after one treatment and a 98 percent rate in killing mature honeysuckle plants after two rounds of foliar treatment. These rates do not account for resprouting plants from seed banks in the years to come. “In addition, we have found Japanese knotweed to be very challenging to fully eradicate, especially in places where there are significant populations in adjacent areas. After two rounds of foliar herbicide treatment we expect a 95 percent kill rate of the initial population, though additional follow-up treatment may be needed for two to four years to treat lingering populations,” Redstart wrote in their proposal.

“The time to address it is now; more costly in future effort,” Haberle said.

Haberle said that the commission is hopeful relationships with other community organizations can be established to handle the mowing.

“Do you think this has the potential to enable the Austin parcel to be more accessible to the public?” asked board member Kari Dolan.

“Absolutely. We’re hoping to work with the path to develop that mow strip buffer. It might be possible to use it as an extension of the path,” Haberle said.

Board member Sal Spinosa asked if another flood like Tropical Storm Irene would re-inundate the cleared zone and start the problem all over again.

Haberle said that could happen but also noted that the trees that were planted by Friends of the Mad River in 2007 survived that flooding and would help create the over canopy that deters knotweed.

“Ecology waits for nobody. Right now that parcel is teetering on the verge of uncontrollable and the knotweed is marching up the Mill Brook,” Haberle said.