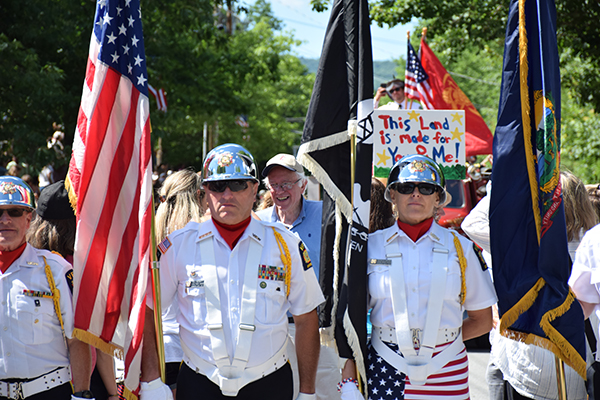 People began arriving as early as 8 a.m. before they closed down Main Street for Warren’s annual Fourth of July parade, celebration and street dance. From that hour the crowd consistently grew. Parade grand marshal Claudia Becker and friends led the way when the parade began. And just after 10 a.m. everyone got what they had been waiting for when Vermont Senator (and 2016 Democratic presidential candidate) Bernie Sanders led the parade through Main Street waving and hugging children who ran up to him in the street.

Not long after that around a dozen Bernie Sanders impersonators walked by, along with President Trump, Vladimir Putin and the cast of Fox News. Children sat atop most floats, spraying water and throwing candy into the crowd as they drove by.

After the last fire truck made its way down Main Street, a wave of celebrators marched behind it into the town center. Music quickly started blaring from The Warren Store’s porch and the usual shenanigans ensued.

Below is the list of superlatives given to each float in this year’s parade: