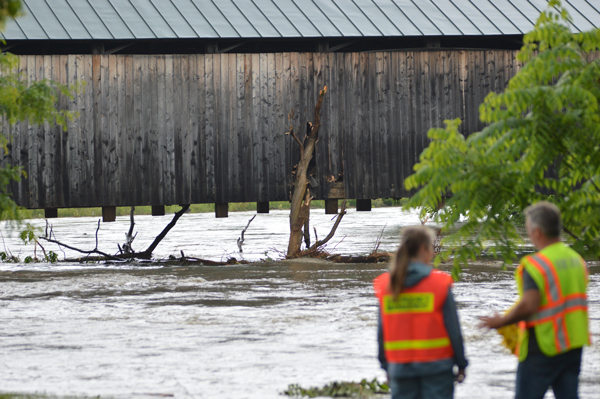 Waitsfield’s covered bridge has been in place since 1833; it took The Valley’s most recent storm to show its resiliency.

On Saturday, July 1, during flooding, a large tree floated down the river and was impaled in the south wall of the Great Eddy Bridge. The bridge was shut down for just one night. An Agency of Transportation engineer declared the bridge safe for regular traffic at 7 a.m. Sunday morning, July 2.

The Valley received 4 inches of rain in three days from Thursday, June 29, through Saturday, July 1, almost 5 inches since June 24 and a total of 10 inches in the month of June.

The Mad River began to rise Friday afternoon and reached flood stage of 9.27 feet at the stream gage in Moretown shortly after 8 p.m. on Saturday. Peak stream flow was 6,430 cubic feet per second (cfs). Flood stage is 6,000 cfs. More rainstorms that were forecast for Saturday night missed The Valley and floodwaters receded.

During the flooding, Route 100 from Granville to Warren was closed for a time and the river crested its banks in Warren Village.

Links to Video Below

In Waitsfield, apart from interfering with commuters’ normal routines, the incident put a couple of The Valley’s summer traditions at risk, namely the Mad Marathon and jumping off the historic site to cool off in the Mad River.

Waitsfield-Fayston Volunteer Fire Department fire chief Lester Miller said that if anyone asked him at the time of the incident whether the bridge would be open for the marathon next week, July 9, let alone the next day, he would have said no.

The scene on Saturday night would have led people to believe the worst as well. Bridge Street was cordoned off with numerous layers of caution tape, fire trucks were parked throughout the scene and bystanders filtered in to catch glimpses through the night.

Waitsfield Select Board member Sal Spinosa arrived a little while after the emergency response team. He ensured the bridge was secure by hiring Hunter North Security to keep curious pedestrians at a safe distance.

The fire department was back Sunday morning and with the Agency of Transportation’s go-ahead they sawed the tree in half, sending it back into the river.

Although there was no major damage, there is a sizable hole that has been patched up for the time being. As far as summer plans go, all is well at the covered bridge.