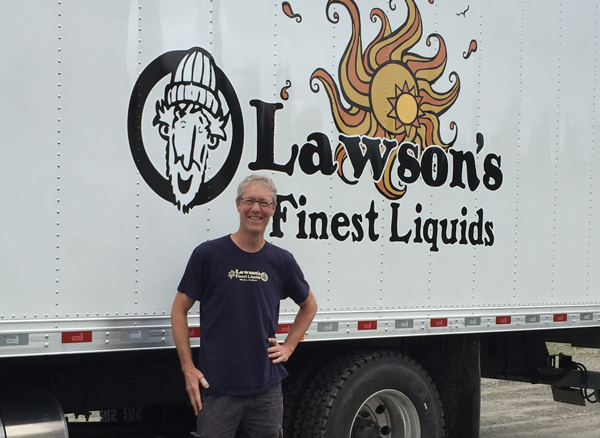 By mid-August Lawson’s Finest Liquids is expected to close on the property in Waitsfield where a new brewery will be built and ground will be broken shortly thereafter.

Sean and Karen Lawson, Warren, announced their plans to move their small home brewery to a newly-constructed and much larger brewery in Waitsfield in the spring of 2016. They budgeted one year for permitting and it took all of that plus a month or so. They received their final permits last week, an Act 250 amendment and a Vermont wastewater permit.

This week, Sean Lawson stopped by the former Valley Rent-All property on Carroll Road in Waitsfield that he intends to buy. His construction team is ready to go with Mark D’Angelo on board as project and construction manager and Roggco Inc. on board to do the construction.

“First we’ll recycle as much of the Valley Rent-All building as we can. I should say we’ll reuse, then recycle, then demo what’s left. Even with having to demo parts of it, we will recycle more than 90 percent of the building. We’re hoping for 95 percent,” he said.

The former Valley Rent-All building will be a tasting facility for the award-winning beer and the former tent storage/cleaning building on the south side of the property will be the brewery.

This fall he will begin ordering the bigger pieces of production equipment and he and Karen are hopeful that the tasting room building envelop will be enclosed by the time snow flies so that work can continue throughout the winter in both buildings.

“If everything goes perfectly, we will open next summer or fall,” he said.

When they do open, the new facility will be capable of producing 30bbs of beer a week, compared to their current 7bbs brewery in Warren. They will keep the smaller brewery operational for experimenting and developing new recipes. Lawson’s Finest will continue to manufacture its Sip of Sunshine label at Two Roads Brewing in Connecticut.

The new brewery will use the Winter Park decentralized wastewater system. The town of Waitsfield paid to install a pre-treatment system for that system which reduces the biochemical oxygen demand (BOD) level of the effluent significantly, increasing the amount of wastewater that that system can handle.