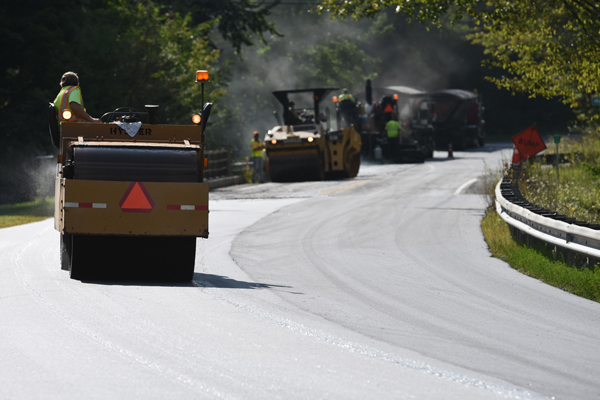 The Colchester District of the Vermont Agency of Transportation – which includes The Valley – elected to spend about $117,000 of what the agency calls “mad money” on leveling Route 17 from the bridge at the bottom of Dana Hill to German Flats Road.

Each transportation district receives this mad money each year. That repair of the bottom of Route 17 does not mean that the section from German Flats to the top of the Appalachian Gap will see repairs any time soon.

While each individual VTrans district can decide how to spend its mad money, there are also district and regional planning processes that rank the state’s roads in terms of where state and federal highway funds will be spent each year.

Ted Domey, the technical paving manager, said that shim coating or leveling Route 17 was not on the list for this year. He said that prioritization of the worst roads in the state is done in the asset management division.

Chad Allen, director of the VTrans Asset Management and Performance Bureau, said his bureau is aware of how the Colchester district spent its mad money and the fact that that shim or leveling of Route 17 left a gap between the bottom of Dana Hill Road and Route 100 as well as above German Flats to the top of the App Gap.

“We do want to make sure those gaps are addressed so that the pavement could all be done at one time,” he said, noting that that goal doesn’t mean that Route 17 is ranked bad enough to ensure any work in the immediate future.

He said that Route 17 from German Flats to the top will be addressed next spring and said that in terms of its potential for leveling treatment, that depends on where the road ranks compared to other priorities across the state.

Allen said that three components go into the state’s ranking of which roads are most in need of work: asset conditions; the district’s ranking of issues within that area; and the regional planning commission’s ranking of the roads and issues in that district.

Route 17 currently sits in 37th place on the state’s list of roads in need of work.