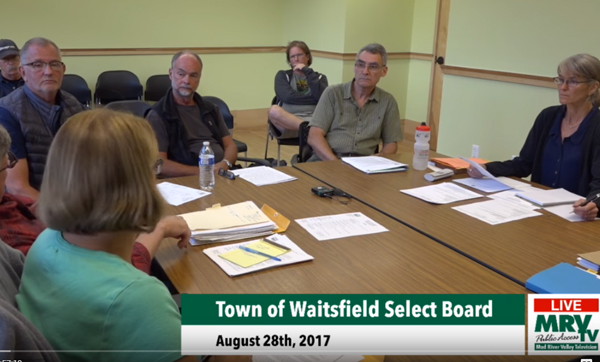 The Waitsfield Water Commission offered the Waitsfield Select Board $14,198.48 to help pay for the 2014 water main break. The select board members did not accept that offer at its August 28 meeting.

“I’m not going to support what you offer,” select board member Sal Spinosa said after a long discussion.

Spinosa told the water commissioners, Robin Morris, Bill Parker and Peter Reynells, to come back with another figure, or share of the cost, and said that the next time the two groups meet the select board will have a number of their own. Darryl Forrest, who is the chair of the water commission and a select board member, was not present at the meeting and had recused himself from the conversation.

After a state contractor struck the water main in 2014, the select board sued the state of Vermont, and after protracted litigation, and ultimately mediation, the town agreed to accept $80,000 from the state. That left the town paying $129,548. The select board has asked the water commission to pitch in some or all of the money.

Chris Pierson, who was a member of the select board at the time of the break, attended the meeting and questioned what the water commission could have done. He believed the commission emergency fund to be around $10,000 in 2014.

“That wouldn’t even be a deposit for a lawyer on the case,” Pierson said.

Reynells explained that he would have put a temporary fix in place until the select board could get the state to pay for the repairs, but he was not asked.

“What value is the water commission? You guys took over, you absolutely handled the thing 100 percent and we knew nothing about anything with the legality of it. Who is to pay and who didn’t pay. So for me, as I sit on that board, what does it matter?” said Reynells.

Reynells also said it is unfair for the select board to handle the settlement with the state on its own, and then turn to the water users, about 100 residents, for the money.

The commissioners also explained that the water users are currently paying for the town’s fire suppression system, which they claim makes the system a town asset, and the cost should be shared across all of the taxpayers.

Before the water system bond was approved by voters, the project was changed between the first no vote in March 2008 and the final yes vote later that year. The town revised the project to include fire hydrants with no provision that taxpayers would pay for them. The water system required three votes before it was passed.

The fire suppression system required a larger tank and a larger pipe to be installed. It also added about $1.2 million to the project, which Parker said raised the cost to the users even though the entire town benefitted from the addition.

“If the town paid its fair share it would drop everyone’s bill by a third. It would put us in the same category as almost every other town of our size,” Parker said.

Parker also explained that if the water commission is asked to pay the entire cost of the break, users’ rates would about double.

The water commission brought up the idea of a fire district, or perhaps a memorandum of understanding, with the select board that would shift more responsibility to the commission going forward.

If the water commission became a fire district it would have the ability to borrow money and, according to select board chair Paul Hartshorn, tax the town.

For the rest of the meeting he tried to keep everyone present on topic, the $14,198.48 that the commission was offering.

Pierson believes that the water users should be paying the bill because that is the agreement that was originally made.

“I do know how it was sold. I do know that I was told when the fire protection system went down my insurance rates would be dropping. My insurance rates have not dropped. The only people that benefitted from this entire project disproportionally are the users,” he said.

Jerry Miller, one of the only other residents in attendance, ended the conversation, stating that he would be pushing for the taxpayers to contribute to the cost. He explained that in 2008, before the water system was in place, his house burned down.

He said the fire department was there, but their tanks ran out of water and in the time that it took them to go back to fill up again, it was too late. He said he had to believe that if there were a closer hydrant and better system, it could have affected the outcome.