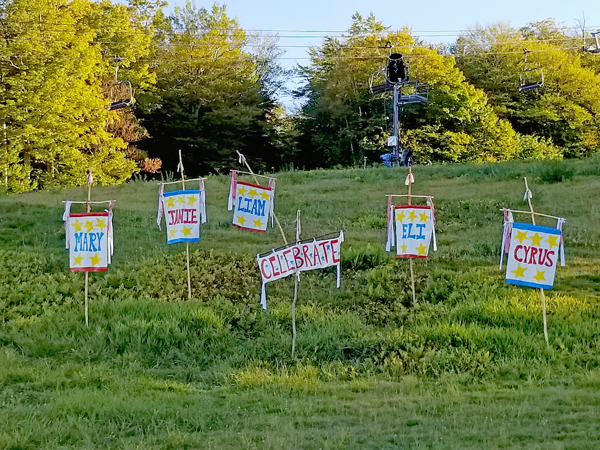 On the one-year anniversary of their passing, families and friends remembered and celebrate the lives of Eli Brookens, 16, of Waterbury; Janie Chase Cozzi, 15, of Fayston; Liam Hale, 16, of Fayston; Mary Harris, 16, of Moretown; and Cyrus Zschau, 16, of Moretown with an event at Mt. Ellen on October 1.

The five teenagers were killed in a collision the night of October 8, 2016, when a driver going the wrong way on Interstate 89 hit them head-on.

In addition to the celebration of life that was held on the weekend, the teens will be remembered at a dedication of a gazebo at Harwood Union today, October 5. The families of the five teens have also donated a pavilion at the Mad River Park fields in Waitsfield.

The tragedy was ruled a homicide, not an accident, by the then-Chittenden County State’s Attorney TJ Donovan.

The five local teens were on their way home from a concert. Four of the students attended Harwood Union and one, Janie Chase Cozzi, attended Kimball Union Academy in New Hampshire.

The driver, Steven Bourgoin, 36, who survived the collision, was charged with five counts of second-degree murder. He is being held without bail at Southern State Correctional Facility in Springfield.

In a hearing in May, Bourgoin was granted permission to have phone contact with his ex-girlfriend and 3-year-old daughter, according to the Times Argus. Previous to the fatal crash in October, Bourgoin was charged with domestic abuse, but his ex-girlfriend, Anila Lawrence, requested that the restraint order be lifted after he was in prison, according to Bourgoin’s lawyer, Sara Puls.

Bourgoin, who has been determined fit to stand trail, is not expected to be tried before February, Chittenden County State’s Attorney Sarah George said. According to a Times Argus report on May 20, there are more than 100 potential witnesses. If convicted, Bourgoin faces 20 years to life in prison on each of the five homicide cases.