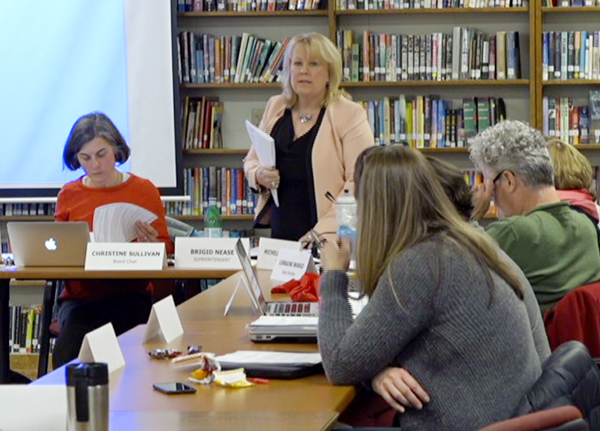 What would happen if all fifth-grade students in the Harwood Unified Union School District (HUUSD) were in one building? How about if all fifth- and sixth-graders in the district attended Crossett Brook in Duxbury along with the fourth-graders from Thatcher Brook?

These ideas are part of a district redesign white paper that HUUSD Superintendent Brigid Nease released to the school board and the public last week.

“I am well aware that these types of redesign big picture changes have pros and cons and will likely be met with fiercely opposing viewpoints. However, I am hoping that these thoughts and recommendations act as a catalyst to engage our communities in tough but robust civil dialogue,” Nease wrote in the paper.

These moves would allow the district to cut down on duplicative costs in materials and services, Nease explained. It could also open up the door for stronger extracurricular clubs, like band, chorus, drama, and robotics dance.

By bringing fourth-graders from Crossett Brook, four classrooms would be opened at Thatcher Brook for additional in-school pre-K.

With the fifth- and sixth-graders from The Valley attending Crossett Brook, all pre-K to fourth-grade students, could fit into two schools rather than four. Class sizes in both would be closer to the Vermont Agency of Education’s recommended 17 to 20 and they would be able to operate “looping classrooms,” Nease writes.

Looping classrooms allow students to remain with the same teacher for two years, but each grade would stand alone, rather than a multi-age classroom, as many of The Valley’s elementary schools have now.

Nease explains a variety of options that could be possible after all of the above changes. The central offices could be moved into one of the decommissioned elementary schools, which could provide additional support for evening programming and it would save the $35,000 in rent each year that taxpayers currently pay.

They could also repurpose one of the empty schools as a behavioral intervention program, which Nease believes would be better and more cost effective than the consulting services that they currently employ.

“It is not that who we have been isn’t great. It is that our state has changed, including the way that Vermont public schools can remain affordable while still maintaining quality,” Nease noted at the end of her position paper.

Nease said that she hopes that the community will consider the suggestions that she has put forth and look into the possibilities.

“If in the end you choose to do nothing and keep things the way they are, we can all say that we have studies and considered the pros and cons, completed the hard work and decide not to make significant change,” Nease said.

The Harwood Unified Union School District, along with many other Vermont school districts, is up against declining enrollment as well as pressures from Governor Phil Scott’s administration. Nease has released a redesign proposal that she believes will help.

In Nease’s white paper she outlines the issues that the HUUSD and its governing board faces. She explained that Governor Scott is pushing school districts to contain per-pupil spending, lest a hefty property tax be imposed on Vermont residents.

Nease does not believe that this “one size fits all” approach will work. Nease explained in her paper that what Governor Scott would like to see only works if all of Vermont’s school districts buy into the plan. Simply put, they will not, Nease says.

“Some school board’s will cut and reduce programs and defer maintenance, while others spend and grow,” Nease said.