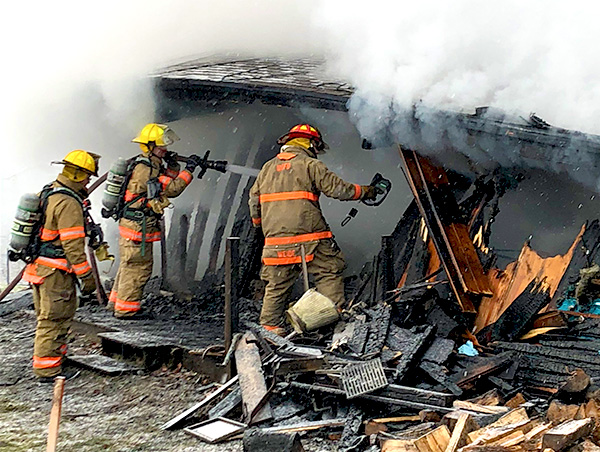 Firefighters from Waitsfield, Warren and Moretown responded to the blaze which is thought to have started in a basement utility room, under the woodstove, according to Waitsfield fire chief Adam Cook. King's wife, Barbara, escaped the fire.

The fire call came in around 4 a.m. and mutual aid was called for very quickly, Waitsfield firefighter and former chief Paul Hartshorn said. The King house is located near the bottom of Center Fayston Road.

The fast-burning fire partially collapsed the roof, leaving a portion of it hanging over the woodstove and collapsed chimney area. To be able to complete extinguishing the fire, firefighters called an excavator to the site, which Kingsbury Construction supplied after Center Fayston Road and the King driveway were extensively sanded. The driveway and its intersection with Center Fayston Road were icy from water used to fight the fire.

The excavator was used to remove the roof from the structure.

Cook said that the tanker trucks from the three local fire departments were able to use the fire hydrants that are part of Waitsfield’s municipal water system to fill their tanker trucks.

There is a fire hydrant near Tremblay Road, which is pressurized and capable of filling a tanker truck very quickly. Waitsfield’s 3,000-gallon tanker truck can be filled in 3.5 minutes from that hydrant.

For this fire, Cook said the Waitsfield tanker made five trips to the hydrant, Moretown’s made four trips and Warren’s tanker made one trip. The tankers range in size from 2,500 to 3,000 gallons and he estimated that somewhere near 30,000 gallons of water was pumped on the fire.

That hydrant was also used by all three fire departments to fight a fire on North Fayston Road in December when Fred Viens’ garage and shop burned down. For that fire, Hartshorn estimated that 15,000 gallons of water were used.