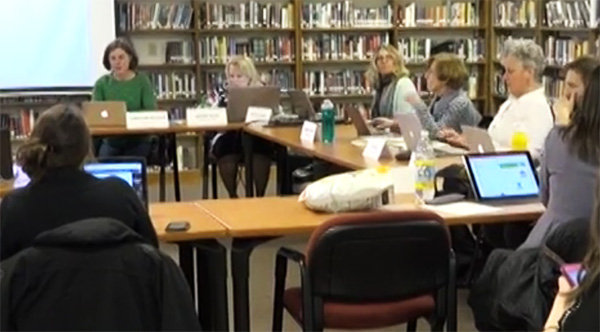 Now that the Harwood Unified Union School District (HUUSD) Board has passed a budget for fiscal year 2019, board members can move onto the next big project: redesigning the school district.

In December, Superintendent Brigid Nease put out a white paper detailing her vision for the school district, intended to save money and provide more opportunities to the district’s students.

Nease outlined numerous changes including moving all of this district’s middle school students to Harwood, putting all fifth- and sixth-graders at Crossett Brook and moving from four elementary schools in The Valley to two.

At a January 17 meeting, Waterbury board member Melissa Phillips asked Nease if the changes made in redesign would be permanent and how much could a redesign actually save taxpayers if the district is still paying for the rest of Vermont’s school districts through the state’s education tax model.

“I never believe that you would make sweeping change for something that could potentially be temporary and I don’t think money is the only factor in this dilemma. I think it’s complex. But I think the quality of the schools and holistically what you’re able to provide for your students over a long period of time is first and foremost the most important part,” Nease said.

Nease explained that she expects the state to continue using spending penalties in order to curb education spending at the district level. In the past, the Washington West Supervisory Union, now the Harwood Unified Union School District, have abided by the guidelines to avoid such penalties and it didn’t help the district’s tax rate, because other districts did not fall under the spending penalty, and it did not help students.

Through a redesign, the district has an opportunity to be proactive, Nease explained in her white paper.

Some board members asked about moving forward slowly, while others supported moving ahead quickly.

Alycia Biondo, of Warren, explained that it has been a goal in the district to combine the middle schools, so that could be the first step.

However, Nease explained that while some pieces could be acted upon independently, some would need a more holistic change. For example, if both middle school cohorts were to move into Harwood, it would leave Crossett Brook very underutilized.

Another aspect that has come into play is the need for a bond vote that would coincide with the redesign. Nease explained that in order to make some of these changes, schools may need to be updated.

For instance, if Waitsfield Elementary School needed to incorporate the students from another elementary school, classrooms might need to be added and the kitchen would need additions in order to provide food for the added students.

Nease explained that one goal of the redesign is to merge cohorts sooner. She explained that classrooms are stronger with a more diverse group of students and that can be achieved by combining students.

Caitlin Hollister, of Waterbury, motioned for Nease and the administrative team to cost out the items outlined in Nease’s white paper, which will provide a starting point for the group.