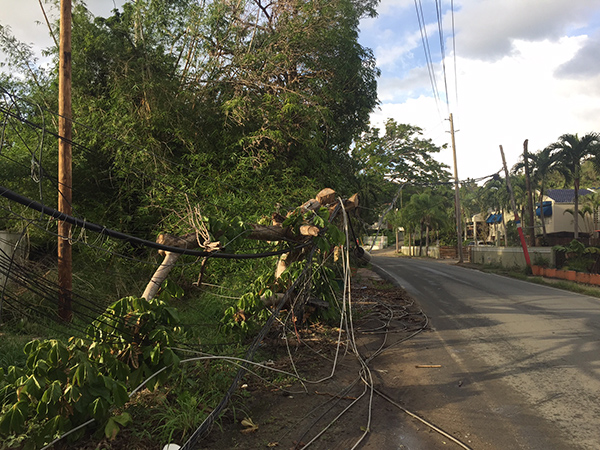 One hundred days after the storm

Local women Nancy Wilson-Rhoades, Fayston, and Bev Kehoe, Waitsfield, traveled to Puerto Rico to assess appropriate sites for the Power on Puerto Rico Portable Solar Charging Stations (POP or SOS). This is a joint project of Amurtel, an international relief organization directed by Joni Zweig, Warren, and Amicus, a consortium of U.S. solar power companies, including Aegis, Waitsfield, owned by Nils Behn, Fayston. The short-term goal is 10 trailers with 2 kilowatts of power that are loaned to communities without power. More than 100 days after Hurricane Maria large portions of the island remain without power.

Here are some initial stories from folks Rhoades and Kehoe met in their travels.

Frederick Figueroa is descended from generations of coffee farmers in Indeiras, Maricao, in the mountains 3,000 feet above Sabana Grande in southwestern Puerto Rico. He studies animal sciences at the University of Puerto Rico Mayaguez and on class day drives more than one hour each way on steep and winding roads. He spoke about possibly getting an apartment closer to campus, but his parents are rather strict. Part of his university life includes volunteering with Instituto, a nonprofit organization committed to building stronger communities. Before the hurricane he focused on setting up a training/learning center in the Indieras area but then shifted to relief work. He and other classmates visited homes to distribute water, food, clothes as well as the solar-powered flashlights that were donated by Verilux soon after Maria hit.

Figueroa’s home is painted bright yellow and sits on a manicured lawn at the crest of a hill. It’s been without power for more than 100 days and counting into the unforeseeable future. When the hurricane started at 2 a.m. on September 20, the wind was terrifying. His cousin Luis, a pre-med student, described hearing voices in the winds as the storm raged. Both cousins emphasized that Maria, rather than discouraging them, strengthened resolve to continue their studies and realize their commitment to helping others.

Frederick showed the expanse of sparsely vegetated (but greening) hillsides that were lush with coffee four months ago. At the home of his great uncle, people come for water from his well. This is a potential site for one of the SOS units as people come here already for help, there is a strong trust and community connection, it sits next to a church and is gated. The backyard is filled with baby coffee plants and the family has a coffee drying business.

Manuel Toledo is a professor of electronics at the University of Puerto Rico and his wife, Angela, handles several rental properties, renting mostly to students. Toledo’s father lives with them, along with two dogs, two cats and many birds in the trees. The local women are staying in a studio apartment that they usually rent to students. Angela Toledo said that she bolted down the solar panels before the hurricane and was surprised that they survived, but the water tank went flying. After the high winds stopped, they went outside to assess and repair. Their driveway was blocked by massive tree trunks so they were home for four days before they were able to clear.

At the Rincon farmers’ market, a young couple selling tamarind juice and cocoa butter sunscreen now travel one hour to the market because they still have no power and had to move back in with one of their parents.

The stories are recited in varying voices, sometimes with drama, or with tears, alacrity, resignation or acceptance, but they are always accompanied with thoughts about the next hurricane season. There’s talk about the six or eight months left to get ready. Damiana, a normally sunny and positive owner of a paddleboard rental company, spoke about if there’s a next time: “Puerto Rico will be done.” Crispin, a de facto leader in a neighborhood in Anasco that flooded to the first floor from the confluence of river and ocean, said his area doesn’t need an SOS because they got power (just last week) but reminded the local women that we are “not too late for next time.”

He gave a tour of an elementary school that closed for budgetary reasons and he is cooking up a plan for a community training and learning there and planted seeds in the raised beds in the yard. He is growing beans and spinach, and university students are building more beds. “The sun, the air, the soil,” he recites as he trimmed the green leaves, “This is the future of Puerto Rico.”

“As of this writing we are soon off to other communities for the next few days. We will have more stories and pictures to share. We are still needing money to complete and ship the trailers and appreciate any help you can give. Here is the link to the website with information for donating: www.amurtel.org,” Kehoe said.