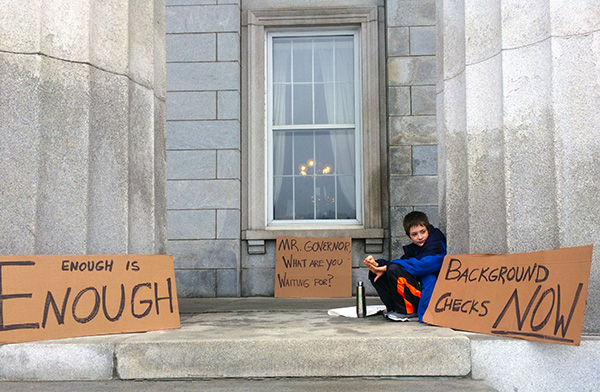 About 200 people, including local residents, gathered on the steps of the State House in Montpelier Tuesday to raise their voices against gun violence.

The rally, organized by GunSense Vermont and shaped by student voices, came in response to the recent school shooting in Florida that left 17 dead, as well as two incidents in Vermont that served as a grim reminder that our state is not immune to such violence.

“My kids are really scared,” said Fayston resident Cathi Levey, who attended the rally and has two daughters at Harwood. “They’ve been asking me if it’s safer to hide under a desk or run out of the school when they hear gunshots.”

Police officers fatally shot an armed young man on school grounds in Montpelier in January. Just days after the Florida school shooting this month, police arrested a teenager who was allegedly planning to carry out a shooting at his high school in Fair Haven, Vermont.

The right for students to feel safe at school was raised repeatedly at the rally. “At this point, it’s really simple: You either care more about your right to own a gun than you care about kids’ rights to go to school and not be shot … or even go to school and feel safe,” said Montpelier High School junior Nathan DeGroot to the crowd.

Burlington Mayor Miro Weinberger also spoke at the rally: “We are failing at our most basic responsibility of protecting our children,” he said.

Vermont and Maine are the only New England states with no restrictions on the right to bear arms, meaning no required permit, background check, waiting period or permits for open or concealed carry. However, federal law does require all licensed firearms dealers to contact the FBI to run a background check.

But three bills on gun reform have been proposed. S.6 would require a background check on gun purchases from a nonfamily private seller. H.422, which passed the Senate last year, gives law enforcement the option to remove firearms at the scene of a domestic violence incident. S.221 allows for a court process whereby the police can confiscate firearms for up to one year from someone proven to be “of extreme risk” to themselves or others.

Valley Representative Maxine Grad was a lead sponsor of H.422 and said the House “heard testimony from family members who feel if such a law was in place their loved ones who were murdered by their abusers might still be alive.” She said she supports all three bills.

After the Florida school shooting, Governor Phil Scott rejected calls for any gun legislation but had a change of heart just days later.

“To be quite honest with you, in the aftermath of Florida, this situation in Fair Haven has jolted me,” Scott said in a press conference.

Zoe Hecht, a Burlington eighth-grader, addressed her comments at the rally directly to Scott.

“[Scott] said that he is open to having ‘an honest and fact-based discussion about access to guns,’ so I would like to present him with some facts. Fact No. 1, 361 children and teens, aged zero to 17 have been killed or injured in gun-related circumstances so far this year. Reminder: It’s February 20,” Hecht said.

The 13-year-old went on: “We’ve reached a point where on a Friday morning when we’re supposed to be learning about composition and color in art class, we have to be discussing what we should do if the shooter has us cornered in a room. If ‘public safety is the primary function of any government,’ you are not fulfilling your duty, leaving it up to teachers and kindergarteners who have been learning to throw books and make commotion to give the students, what, an extra 10 seconds before a shooter opens gunfire?”

As she left the rally, Waitsfield resident Eleanor D’Aponte, mother of two, said, “I took away from this that our kids are on the front line and that they are really scared.”

“I also think that most people who are pro-gun safety legislation are not anti-gun … that they are not mutually exclusive,” she said.