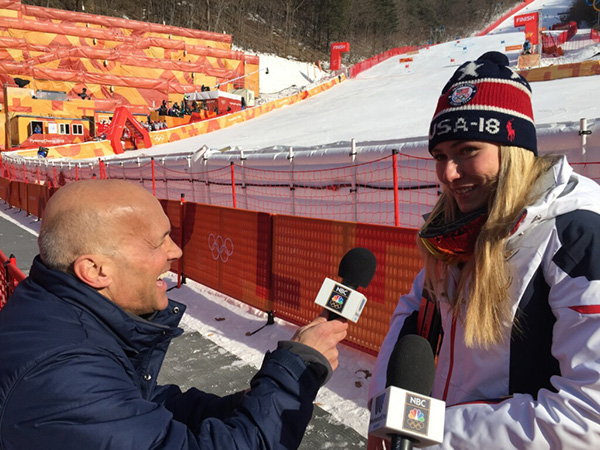 As all of the alpine events were delayed, Lewis watched some of the other events, like the snowboarding halfpipe qualifier and he was able to see Red Gerrard, a 17-year-old from Colorado, win the snowboarding slopestyle competition. However, when he finally began work, the events were just as exciting.

“The venues that Korea created were awesome, the snow was money, it was perfect, the terrain that they built in was interesting and the courses were hard and so it came down to who skied the best,” Lewis said.

Lewis said one of his favorite moments from the Olympics was watching Mikaela Shiffrin win the giant slalom. Shiffrin was not as much of a favorite to win the event, as she was in the slalom, but she pulled away with the gold medal.

“She was super emotional at the finish, with joy, and the cherry on top is that she was an Eliteam athlete,” Lewis said. Eliteam is a summer camp that Lewis runs with his wife Kelley that is attended by many alpine athletes.

“I’ve known her since she was 11 so I have a personal connection that I was very happy about,” Lewis said.

Lewis was also able to see Ester Ledecka from the Czech Republic win the women’s super G, which turned out to be one of the biggest surprises from the Olympics, though not as big of a surprise as some of the national media may have made it out to be.

Ledecka had competed in World Cup races but she is also a snowboarder and she was starting outside of the top 20. Many of the television stations had already stopped covering the race when she came down.

“The thing to remember was that she had won a downhill training run on the World Cup and she has finished in the top 10 in a World Cup. This was not a snowboarder deciding last minute to enter a ski race,” Lewis said.

Lewis also mentioned that alpine enthusiasts have a credible gripe with the television stations covering the Olympics. They routinely cut coverage at the 20th racer and switch to a different sport.

“They’ll do hours and hours on curling and ice skating yet they won’t cover a complete top 30 or even top 20 sometimes of a ski race. So, I have the same gripe as a ski fan about the television, it comes down to trying to figure out what the public wants,” Lewis said.

Lewis is back in Colorado readjusting from South Korea’s time zone. He said he would love the job offer to cover the Beijing Olympics in 2022 but at the same time he did not say whether he has another Olympics in him.

Lewis wasn’t the only Valley resident at the Olympics. Warren resident Nolan Kasper competed in his third Olympic slalom and didn’t finish his second run.