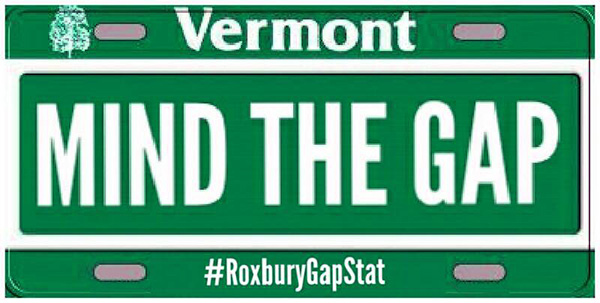 Melanie Hall was receiving numerous phone calls a day about the state of Roxbury Mountain Road. To stop the ringing, she created an online community around one of The Valley’s muddiest roads.

“Slimy but passable today at 2:30. Rutted in places, but not too bad,” wrote one member of the Roxbury GapStat Facebook group.

“Words to live by (for the moment!),” Hall, the page administrator, posted.

Anyone that has lived through the spring in Vermont knows that roads travelled in the early hours of the morning may look completely different on the drive home later that day.

“Gap is holding up. Icy, crunchy and quite grippy,” reads a post from January 22 with a thumb’s up emoji.

Hall drives on Roxbury Mountain Road every day and so she always receives calls from friends that are headed out of The Valley looking for a status update on how the road was looking. Hall thought that the community as a whole could do a better job of keeping neighbors up-to-date on the state of the road, so she created Roxbury GapStat, a page devoted to alerting drivers of treacherous conditions.

“I’ve heard so many times, ‘If we had only known that there was a car accident or it was bad we would have gone around and this way they could check in before getting off the interstate,” Hall said.

Throughout the page’s feed there are constant posts about the road, how rutty it is, if there has been an accident or if it’s icy. Often times the posts include pictures.

“Two cars stuck on Warren side heading up -- sheet of ice! Avoid it!” reads a post from February 16.

Hall still posts from time to time but it’s populated with plenty of other users that are helping keep drivers informed.

For example, yesterday one of the group members posted, “Looking for an update on the road, has anyone been over recently?” Another user responded, “On it right now, it's typical. Pick a rut, avoid the big mud holes and take care by the Grey Flannel.”

“I have definitely noticed that there is less traffic when the road is bad because people are more mindful of when to go over or when not to go over and that’s really good for the road actually,” Hall said.

The page has 858 followers and Hall recently solicited entries for a slogan. “Pick a Rut and Stick With it,” “The Roxbury Gap: Drive It If You Can!” “Stairway to Heaven,” and “The Roxbury Gap: Even AAA Can’t Save You” were some of the entries received.

The winning entry was “Mind the Gap” and the group is having T-shirts and bumper stickers made.

“The beauty of social media is you post something once and it takes care of itself for the most part,” Hall said about creating the group.