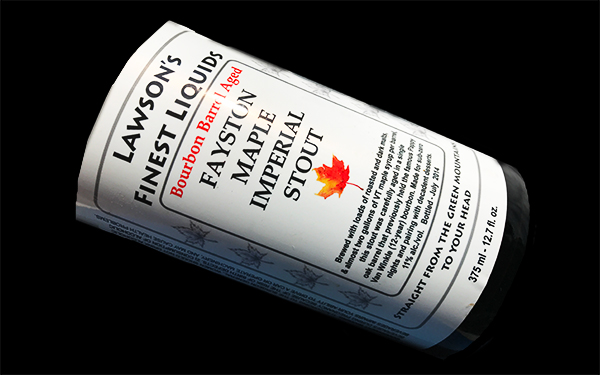 Sean Lawson of Lawson’s Finest Liquids, has been making maple-infused beers since he started home brewing in the 1990s and although he loves brewing all of his beer, spring brewing is a highlight.

“The Maple Imperial Stout has a number of variations where we barrel age that beer in barrels that have held different spirits,” Lawson said. He has made it with bourbon barrels, whiskey barrels, rum barrels and apple brandy barrels, to name a few.

He said he got the idea for brewing maple beers early on, around 1990, inspired by other Vermont breweries that had done it before.

“It’s a challenge to get the maple flavor to come through in the finished beer so I took on that challenge. Because if you add maple syrup to the beer, ferment it, almost all that maple sugar is converted to alcohol,” Lawson said, so it becomes unrecognizable.

The “most special” though, is Maple Tripple.

Lawson brews Maple Tripple just once a year around mid-April, toward the end of the sugaring season.

What makes the beer so unique and extra “mapley” is that Lawson replaces the water in the brewing process with concentrated maple sap. Maple sap taken straight from the tree is about 2 or 3 percent sugar. Lawson boils it down so that he is brewing with a concentrated version, about 15 percent sugar.

Lawson gets the concentrated syrup from Dave Hartshorn in Waitsfield.

The change makes the beer stronger, or what Lawson calls a “high-gravity beer.”

“Using the maple sap in place of the water and making a big robust beer with a fair number of specialty grains that lend some nice, sort of toffee, caramel and malty flavors to the beer so it turns out a nice, dark ruby amber,” Lawson said.

Also, once the beer is finished fermenting and cold conditioned, he racks it in oak barrels that previously held maple liqueur, which he gets from Saxton River Distillery in Brattleboro. Lawson said doing this adds another layer of maple flavor.

“You know, they’re all my favorite to brew but the Maple Tripple is definitely one of the highlights of my year,” Lawson said.

Maple Tripple has won at the World Beer Cup three times in the specialty category.

Lawson said that it’s nice to put Vermont maple on the map in the beer world.