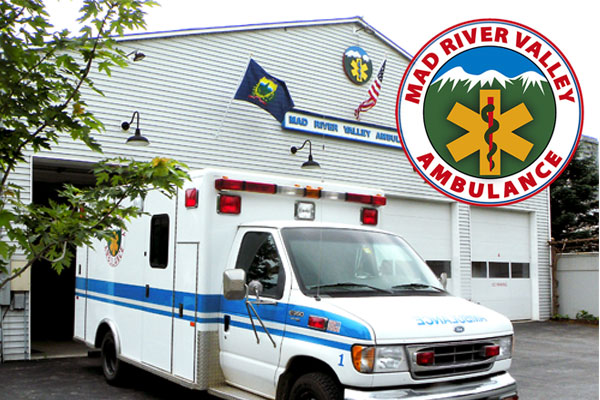 That will never happen here in The Valley where Mad River Valley Ambulance Service (MRVAS) volunteers – 70 of them – respond to calls for help from their neighbors. That’s the word from MRVAS president Richard Lord, Fayston.

“We’re never going to have nobody show up and we haven’t for 48 years,” Lord said. MRVAS is constantly recruiting new volunteers and in the last six months 10 new members have joined the service.

“Ninety-seven percent of our calls are covered only by MRVAS. Right now, we have a couple of shifts where we’re having difficulty getting coverage, but that is primarily because we have three crew chiefs who are out. We’re running thin on crew chiefs and we have had to call Waterbury Ambulance for a couple of calls,” Lord said.

MRVAS has an agreement with Barre EMS, which provides a paramedic intercept as needed for serious cardiac calls and certain types of accidents where pain management is needed. Additionally, MRVAS has a mutual aid agreement with Waterbury Ambulance Service.

Lord said MRVAS volunteers take a great deal of pride in the fact that the local organization can respond to as many calls as it does during ski season and beyond.

“We can have seven calls on a Saturday and with three rigs we get them out and back. We may be down a couple of crew chiefs right now, but we also have three people in the crew chief training program,” he said.

MRVAS is one of only four all-volunteer squads left in the state. Other squads, like Waterbury, have a combination of volunteer and paid members. Some now have all paid responders. Lord said that some services that had started as all volunteer and then went to paid have closed, leaving those residents with long waiting times for emergency medical response. He noted that Valley Rescue, which formerly served Granville, Hancock and Rochester, had closed, leaving those residents to wait for a response from the White River Valley Ambulance Service.

Unlike services that are funded by municipalities, MRVAS is completely self-sufficient financially. It does its own billing and books and purchases its own equipment and vehicles, something its members are also proud of, Lord said.