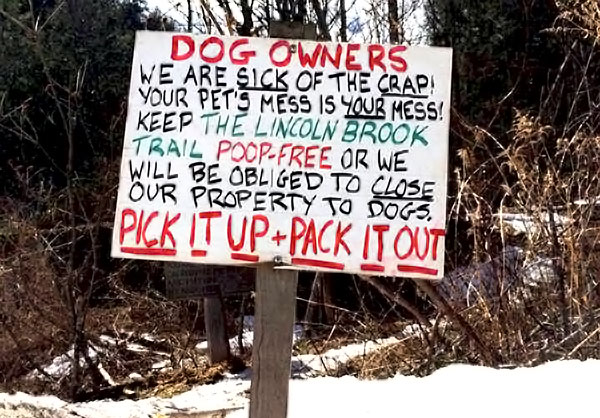 The problem of dog poop on the trails at the Bobbin Mill in Warren is so bad that the hammer has come down. Dogs are no longer welcome to exercise on that privately owned land.

The issue has been percolating on social media, with one Warren landowner, Alison Duckworth, erecting a sign admonishing people to pick up after their pets and creating her own acronym, CRAP (Concerned Residents Against Poop). Duckworth’s Facebook posts generated significant response with people chiming in about the irresponsibility of dog owners who don’t clean up after their pets. Duckworth and her husband own land at the top of the Bobbin Mill trail in Warren.

That didn’t work either. Simpson and Spencer report that bags of dog poop were flung at the sign and at their building on the property with piles of poop found under the sign. Over the weekend, the poop problem caused them to close the property to dogs.

“My daughter and her husband are working down there at the mill and she’s become more and more despondent and outraged by how some people are behaving. It’s just a few who are ruining it for everybody,” Claire Simpson said.

“People are very concerned about the impact of the waste next to the brook and the impact on water quality. We were encouraged to try and get a handle on it. In the past we’d put a barrel there, but people dumped their household trash in it,” she continued.

Duckworth’s property on the upper reaches of the trail that runs along the brook can be identified by the swing that’s on the brook. It’s a sunny spot, a resting spot that hundreds of people come to over the course of the year with their friends and four-legged friends.

“Over the course of the last six to seven weeks, I’ve been surveying that trail and the trail around the snowmaking pond. I’ve probably walked both at least six times, once a week, picking up the poop,” Duckworth said.

“There’s a lot of new poop appearing at the snowmaking pond. I felt like I was getting ahead of it a little, but picking up poop and filling my 2- to 3-gallon bucket, it’s a substantial amount of poops. I’ve picked up hundreds of poops. Everyone I pass says, ‘My dog never poops on the trail,’” she said.

At the Bobbin Mill trail she put up a new sign, the one under which Simpson found bags of dog feces and piles of feces.

“So I’m asking people to pay it forward. I’ve picked up a lot of dogs’ poops. Where one dog poops, others will. I’m asking people to pick up poop if they see it. If their dog poops in the woods and they can’t find it, pick up some other poop. I know there’s going to be accidents, people will say they didn’t see their dog poop or they miss it. But if we all just picked some up …” Duckworth said.

She plans to spearhead a Green Up Day effort to clean up the trails of the Mad River Path Association, where she serves on the board.

“Between the path and my own organization, CRAP, I’m going to see if we can’t get a group to walk the trails and do a poop cleanup. If we don’t, we’re going to lose trails. This problem doesn’t help the Mad River Path for its future and trying to work with other landowners on path easement,” Duckworth said.

For Simpson and her daughter, the closure of the Bobbin Mill to dogs was a last resort. Simpson reiterated her belief that a few people created the problem that is now affecting everyone. She also said that she and her late husband, Barry, felt very strongly that a place as beautiful as the Bobbin Mill should be open and available for the public to enjoy regardless of who owns it.

“It’s such a shame. Barry would never stop people from going to such beautiful places,” Simpson said.